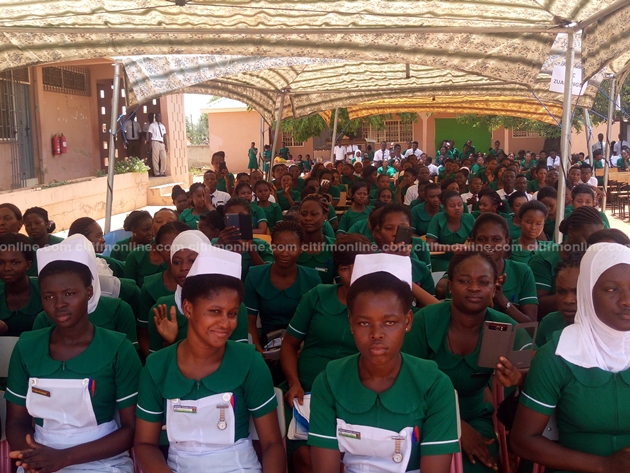 Pe Ditundini Adiali Ayagitam III, the Paramount Chief of the Chiana Traditional Area in the Kassena-Nankana West District of the Upper East Region has suggested “a deliberate and discriminating policy” to make the nursing profession the exclusive right of girls.

“It is my view that since women have a natural tendency to be managers of people including; the young and the old, the nursing profession should be their God-given right after High School graduation,” he said.

Pe Ayagitam III, who was addressing a durbar in his Traditional Area in honour of Mrs Samira Bawumia, the wife of Vice President Mahamudu Bawumia, said “In my humble opinion, this will crush the unemployment challenge by about 51 percent since that is the figure that gives them the numerical value over the male sex.”

Mrs Bawumia is on a four-day tour of the Upper East Region to galvanise votes for the New Patriotic Party in the December 7, 2020 Presidential and Parliamentary elections, and used the opportunity to inspect completed construction works on the shea-nut oil extraction plant at Chiana.

The Chief said unemployment, especially among the youth was one of the major problems that worried the Ghanaian population since the country gained independence, in spite of the several policies initiated by governments over the years to solve the problem.

“None has succeeded, and the problem still linger on despite the numerous interventions. The establishment of this factory is indeed one of such interventions. I am aware of several others initiated by the Akufo-Addo led government.”

The Paramount Chief, who is also the newly elected President of the Upper East Region House of Chiefs, mentioned the ‘One Village, One Dam,’ ‘Planting for Food and Jobs,’ the Nation Builders Corps (NABCO) among other policies as initiatives by government tailored towards the demand of industry.

He commanded government for its interventions, adding “An event of this nature is always a good platform for us to commend government highly for the free education policy. Indeed a flagship policy that has relieved us from the burden of school fees and other related expenses we used to absorb as parents.”

Pe Ayagitam III thanked government for the initiative to establish the shea-nut extraction plant in the area, and requested for effective monitoring of operations of the facility after the installation of machines and oil extraction starts.

He noted that obstacles such as the lackadaisical attitude of some Ghanaians to work, poor maintenance of plants and machinery as well as non-observance of production targets, rules and regulations often led to the collapse of ventures of such as the shea-nut extraction plant.

The Paramount Chief told Mrs Bawumia that “We are confident that you will not turn off your eye for even one minute from the operations of the facility, but that you will insist on a regular and qualitative feedback on its progress.

“We on our part will play a major role of keeping you informed of any lapses that may occur in the course of the operations of the facility.”

He said the Kassena-Nankana West zone comprised of four Paramountcies, namely; Chiana, Katiu, Kayoro and Nakong, and suggested that if buying point or centres were created in a number of localities within the four paramountcies, it would facilitate easy transactions and transportation of the nuts to the production centre.

“Such an arrangement would relieve the nut pickers of the strain and stress associated with robbery, cheating and outright fraud,” he noted.

The Paramount Chief called on government to ensure that prices for the extraction would be attractive enough to compensate for the labour of the women who picked the nuts.