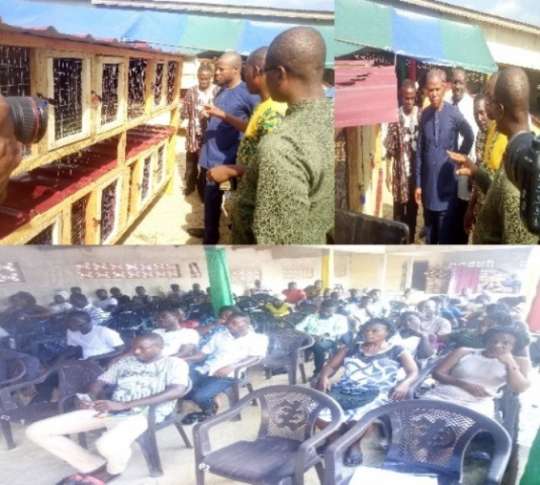 Mr. Sylvester Tetteh, the Chief Executive Officer (CEO) of the National Youth Authority (NYA), has announced plans to give strong support to the young unemployed, to venture into snail farming for export.

They would provide the beneficiaries with start-up kits, financial support, documentation, coaching and mentoring, to explore the over €1million untapped European.

He said this tied in with the drive by the government towards growing the country’s agricultural sector to create jobs and wealth for the people.

Mr. Tetteh was speaking at a ceremony held for 54 young people, who had undergone a six-day entrepreneurship development and intensive training in snail and grass cutter rearing at Essarkyir in the Ekumfi District.

They were taught the right techniques and improved methods of rearing snails and grass-cutters for mass production.

Snail farming has become such a lucrative business that agricultural experts are offering professional advice to prospective farmers to enable them to take advantage of the huge domestic and international market.

Ghana, in 1994, exported about 620 kilograms and 1,050 kilograms of snails to the Netherlands and the United States 9US), respectively.

France has been importing snails, adding value to them and then export to other European countries – Germany, Belgium, The Netherlands and Denmark or to North America.

Other markets include Canada, Switzerland, Japan, Sweden and South Africa getting their major suppliers from Greece, Turkey, Algeria, Tunisia, Thailand and China.

The CEO said the NYA with support from Plan Ghana International, an NGO, would also be distributing grass-cutters to selected farmers, train and guide them to increase their stock for financial benefits.

He added that the Authority existed to provide the right environment to support the implementation of effective youth empowerment programs, focusing on young people’s participation in socio-economic and political development whilst facilitating private and third sector provider investments in youth empowerment.

Mr. Tetteh said due to the high nutritional value of grass-cutters they were attracting high patronage and therefore the need to help farmers to expand their farms to increase production and to also target the international market.

It was no longer viable to be glued to the outmoded methods of farming and that was why the NYA and partners would collaborate effectively to sustainably support young farmers to purchase modern farming equipment to get high returns on investment.

“It will serve as a major farming activity to boost the nation’s protein supply and also serve as a disincentive for setting bushfires in order to conserve the region’s natural vegetation,” he added.

Mr. Emmanuel Sodja Martey, the Central Regional Director of NYA, told the beneficiaries to effectively put the knowledge and skills acquired to use to increase snail and grass-cutter production.

He encouraged them to stick to best practices – periodically take inventory of all their cages, stock of grass-cutters, equipment and other structures.