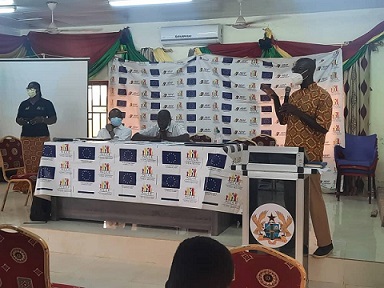 About 50 young persons, with majority as females and persons with disability from deprived communities were trained in liquid soap, pomade, beads, fabric and leather wears production among others.

They were also trained on attractive packaging and marketing skills to enable them attract customers and take advantage of the market demands.

Mr Francis Takyi-Koranteng, the Regional Director of the NYA explained that the training was geared at empowering the young people with skills to venture into productive economic activities to help them live dignified lives.

He said the training would empower the young persons to engage in income generating activities to fight poverty and become self-reliant.

“It is believed that the beneficiaries would use the skills learned to make themselves economically independent and help reduce the rate of unemployment and its attendant vices such as teenage pregnancy, armed robbery, child marriage, prostitution among others in the region,” he added.

The Regional Director advised the beneficiaries to endeavour to impart the knowledge and skills acquired at the training to their colleagues in their respective communities to ensure that the training had maximum impact and positive results.

That, Mr Takyi-Koranteng hoped, would not only ensure gender parity and empowerment but would significantly contribute to the attainment of the United Nations Sustainable Development Goals (SDGs).

He said there was market demand for all the products the beneficiaries were trained on and added that when the youth put the skills into good use, it would provide them with financial security.

Mr Takyi-Koranteng disclosed that plans were in place to replicate the training programme in the rest of the 14 districts in the region with follow- up sessions in three months to ascertain the impact of the training on the youth.

Mr Salam Abdul-Razak a support staff of the Bongo District Directorate of NYA, said the beneficiaries were selected based on their vulnerabilities and hoped that the training would empower them to be gainfully employed.

The beneficiaries expressed gratitude to the NYA for the training and pledged to pass the knowledge acquired to their colleagues at their various communities.

Mr Abraham Abagna, a beneficiary from the Namoo community noted that most of the youth in his area were without jobs and said he would organise a group share his knowledge with them.

Ms Rashida Abdul-Rafik, another beneficiary from Feo Community who promised to share the knowledge with other people in her community, said it would empower girls in the area economically and enable them stand for their rights against men who want to abuse them.

Ms Mabel Asama, another participant from the Vea community said the training would help her to establish her own business to produce ear rings, soap and sandals which would fetch her income and help reduce poverty in her family.