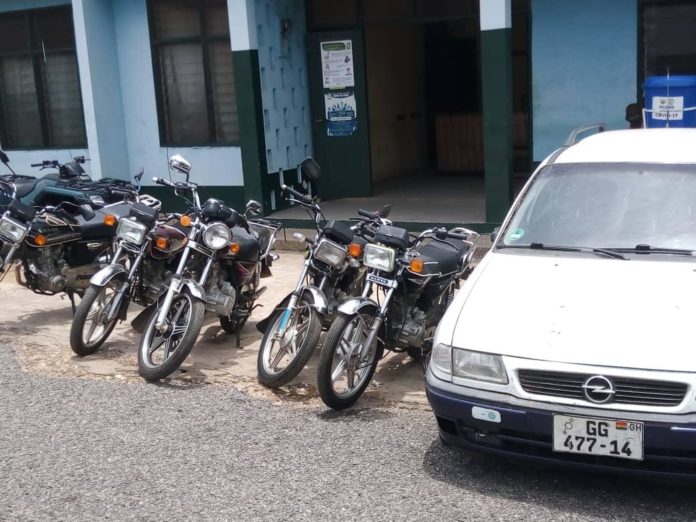 The Nyive Sector Command of the Ghana Immigration Service (GIS) has intercepted an Opel Astra vehicle believed to be smuggled through unapproved routes between Hodzoga – Takla border, near Ho at about 0030 hours on Friday.

He said the driver of the smuggled vehicle with a suspicious registration number GG 477 – 14 sped-off on seeing the Immigration Border Patrol Team after entering into Ghana’s jurisdiction from Togo.

Mr Klu-Adjei said the driver and other occupants then escaped into the adjoining bush abandoning the vehicle at the fringes of Takla town, upon noticing the closeness of the pursuing officials.

He said the vehicle was towed to the Nyive Command and subsequently handed over to the Customs Division of the Ghana Revenue Authority in Ho for the necessary investigations.

Meanwhile, the Nyive and Shia Sector Commands have since the closure of the country’s borders with its neighbours intercepted five motorbikes at various segments of unapproved routes ostensibly for smuggling in foreigners.

Deputy Commissioner of Immigration, Mr Peter Nantuo, Volta Regional Commander, commended the Sector Commanders and their officers for the dedication and professionalism to duty and ensuring security at the country’s borders in the wake of COVID 19.

He thanked the chiefs, opinion leaders, youth groups and the media for their respective roles and collaborations and cautioned against illegal activities at the country’s borders.