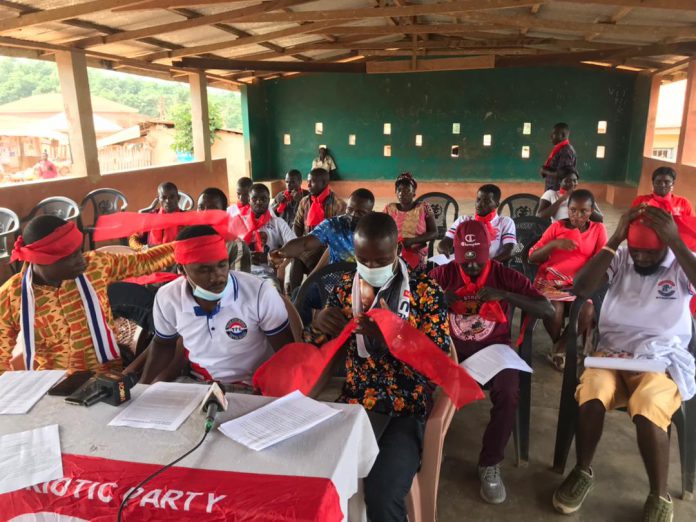 Some youth groups within the governing New Patriotic Party (NPP) in the Evalue-Ajomoro-Gwira constituency have kicked against the re-appointment of Mr. Frank Okpenyen as the Nzema East Municipal Chief Executive (MCE), citing his disrespect to Chiefs and people and underperformance to buttress their stance.

The Groups are however making a strong case for their preferred candidate who is a woman from the Gwira area.

This woman, according to the Groups has distinguished herself in serving the New Patriotic Party (NPP) and the country throughout her life.

The Groups, Train For Change (TFC) and the Gwira Youth Association, at separate press conferences held in Gwira Anyinasie, on Tuesday, April 27, 2021, argued that the elephant family could have retained the Parliamentary seat if the MCE, Frank Okpenyen, had been proactive and respectful to the traditional authorities considering the hard work of the former Member of Parliament (MP), Hon. Catherine Afeku.

To them, preparations to recapture the Parliamentary seat and also retain the NPP in power starts from now, and the party cannot take chances.

According to them, they are living no stone unturned to ensure that Madam Dorcas Amoah, who comes from Gwira and has dedicated all her life in serving the NPP and mother Ghana, is appointed the MCE for Nzema East Municipal Assembly.

They believe that in Madam Dorcas Amoah, all cracks within the NPP in Evalue-Ajomoro-Gwira will be amended since she is a unifier and has the development of the constituency at heart.

“We want to appeal to President Akufo-Addo not to re-appoint our MCE, Frank Okpenyen because of his bad attitude and character towards our own chiefs and party faithful. Franko as he is affectionately called has become too proud and arrogant that he is now above reproach. He is also indecisive and we can’t work with him anymore. We will be glad if a woman in the person of Madam Dorcas Amoah is appointed from Gwira to be our MCE,” the Secretary to the TFC group, Redford Asmah Nreba noted.

To the Gwira Youth Association, Gwira has been neglected for long; stressing that is was about time President Akufo-Addo appoints somebody from Gwira as their MCE considering the votes they bring to the table with the area also serving as the food basket for the entire Municipality.

“The Gwira block is the most dominant ethnic group in the Evalue-Ajomoro-Gwira constituency in terms of land area, voting population and revenue generation. But with all these, we have been denied our equal share of the development projects undertaken by the Nzema Municipal Assembly led by Frank Okpenyen. We want to appeal to President Akufo-Addo to consider appointing Madam Dorcas Amoah as the MCE for Evalue-Ajomoro-Gwira in his MMDCE appointments in his second term. When this done, we will feel recognized and be grateful,” Alfred Adika, Secretary to the Gwira Youth Association noted at the press conference.

Wearing black attires with red armbands to signify how serious they are, the groups believe that the appointment of Madam Dorcas Amoah as the MCE for Evalue-Ajomoro-Gwira will be a fair representation which will bring the massive development to the area and beyond.