Hon. Queenstar Pokuah Sawyerr, MP for Agona East yesterday 1st July, 2017 invited a large number of teachers among whom were best performing teachers in Agona East to join her mark her birthday at her home. 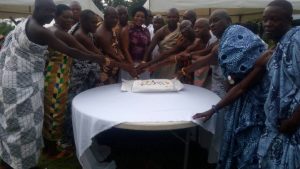 This activity has been an annual affair since the indefatigable MP entered Agona East politics.

Addressing the teachers, Obaatanpa recounted the number of times she had invited them for such a treat, stressing that she cannot leave them behind and concentrate on only BECE candidates who receive a lot of assistance in the form of educational materials and feeding during their exams annually.

Hon. Pokuah Sawyerr noted that the original idea for selecting and awarding one best teacher for each region annually was not fair to the teachers, hence her decision to bring it down to the District level to award as many teachers as possible to serve as a source of motivation for them to work harder.

The Republic Child, Obaatanpa, who is also the most versatile and visible political figure in Agona East today was full of praise for the teachers and observed that, had it not been for the change in government, the best teacher in Agona East this year would have been awarded a salon car as prize to drive home.

For their prize this year, the teachers received smart phones and electronic pressing irons.

There was a splendid performance by school children from Sasakwaa village to entertain the gathering.