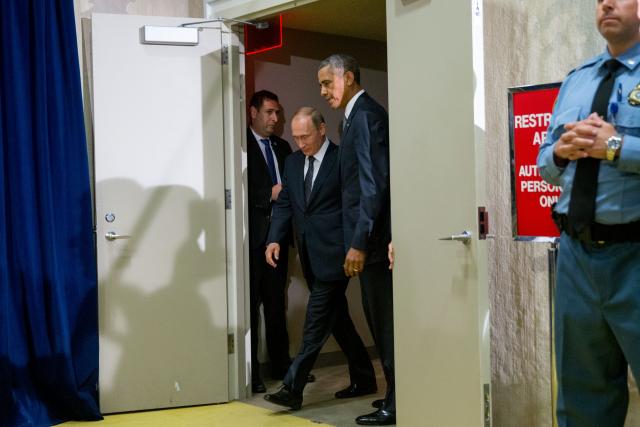 During a 90-minute meeting, U.S. President Barack Obama and Russian President Vladimir Putin agreed that their armed forces should hold talks to avoid coming into conflict in Syria after a Russian military buildup there over the last several weeks.

The United States, France and allied countries are bombing Islamic State militants, who have exploited power vacuums to seize parts of Syria and neighboring Iraq as part of a stated goal of creating an Islamic caliphate.

The reinforcement of the Russian military presence in the country, including the addition of tanks and warplanes, has brought fears of inadvertent or accidental clashes among the forces as well as U.S. questions about Moscow?s main goal.

Speaking after his meeting with Obama, Putin told reporters Russia was pondering what more it could do to support Syrian government and Kurdish forces against Islamic State militants.

?We are mulling over what we would really do extra in order to support those who are in the battlefield, resisting and fighting with terrorists, ISIS (Islamic State) first of all,? Putin said, ruling out deploying Russian ground troops.

?There is (an) opportunity to work on joint problems together,? Putin said of his talks with Obama, which a U.S. official described as ?businesslike.?

U.S.-Russian ties have been deeply strained by Moscow?s March 2014 annexation of Crimea from Ukraine and its support of pro-Russian separatists in the eastern part of the country.

Earlier in the day, relations between the two leaders appeared frosty ? they clinked glasses at a lunch, but Obama had a piercing look as Putin smiled ? and they laid out starkly differing positions toward Assad in their addresses before the annual United Nations General Assembly gathering of world leaders.

Obama said he was willing to cooperate with Russia and Iran to try to end the four-year civil war in Syria, in which at least 200,000 people have died and millions have been driven from their homes. But he described Assad as its chief culprit.

?The United States is prepared to work with any nation, including Russia and Iran, to resolve the conflict,? Obama, who spoke before Putin, told the world body. ?But we must recognize that there cannot be, after so much bloodshed, so much carnage, a return to the prewar status quo.?