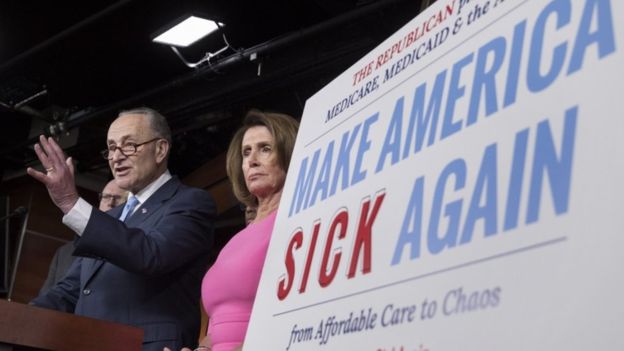 President Barack Obama has urged fellow Democrats to fight for his healthcare bill, as the incoming Trump team vowed to make a repeal of the law a priority.

In a two-hour private meeting Mr Obama sought to rally members of his party, as Republicans took their first steps to dismantle his signature bill.

Vice President-elect Mike Pence was also at Congress, where he told his party they would replace Obamacare.

The law has extended health coverage to an estimated 20 million Americans.

But the 2010 Affordable Care Act law has been hit by soaring premium costs and major insurers withdrawing from the scheme, leaving Americans with fewer choices for coverage.

Some of those present told US media the president had also urged them to “stay strong” as Republicans prepare to take control of the White House and both chambers of Congress for the first time in a decade.

He spoke as Republicans in the Senate took the first step to begin demolishing Obamacare.

They voted by 51 to 48 to debate a budget resolution designed to starve the programme of funding.