US President Barack Obama will return to Chicago on Tuesday to deliver his farewell address, reflecting on his eight years in the White House and looking forward to how the country can deal with future challenges. 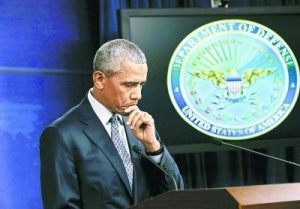 Obama will deliver his final address to the American people from the city where he launched his political career and celebrated two successful presidential elections.

In announcing the address, Obama said he saw the remarks as “a chance to say thank you for this amazing journey, to celebrate the ways you’ve changed this country for the better these past eight years, and to offer some thoughts on where we all go from here.”

Obama was still drafting the speech on Monday, writing out long-hand what will be “the president’s words and no one else’s,” spokesman Josh Earnest said.

The speech will harken back to long-running themes for Obama noting “that for all our differences, there’s much more that unites us than that separates us,” Earnest said, pointing to values such as fairness, justice and the ability to succeed with hard work.

Obama leaves office next week as Donald Trump will be sworn in as US president on January 20.

In remarks since the election, Obama has sought to walk a fine line to ensure a smooth transition to Trump despite significant policy differences with a man he once described as unfit to hold the highest elected office in the country.

Obama has also sought to defend some of his administration’s core accomplishments, including health care reforms, an international climate change agreement, the Iran nuclear deal and diplomatic rapprochement with Cuba, as Trump and his team have vowed to roll them back.

Tuesday’s remarks, however, are not aimed at defending the legacy, Earnest said.