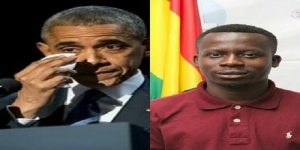 Kenneth is one of the few young leaders who benefitted from President Obama’s young African leadership training programme in West Africa.

On Friday January 13, 2017, Gyamerah wrote a letter on behalf of the African Youth to Obama praising him for leaving an enviable legacy.

He eulogised the former USA President of his worldwide contribution towards diplomacy and development.

It took Obama not more than 48 hours to reply the letter.

Speaking with host of Ultimate Brunch and Lunch, Naa Klordey Odonkor, Mr Gyamerah expressed appreciation to Obama for granting him the audience.

He explained that in spite of the challenges Obama went through he still fought hard to be the President of USA.

“It makes me feel very happy and it has influenced me that no matter where I come from, the most important thing is to believe in myself and to go for my dreams.

Because in this life it’s all about going for your dreams and making sure that you stay focus to it. So it is a very great privilege for me as a young person and I think this is just the beginning because if I focus on what I am doing, I think many things are going to happen by the grace of God,” he envisaged.

The Young man who has also written a letter to President of Ghana Nana Addo Dankwaa Akufo-Addo believes he is bound to leave a good legacy considering the creation of his new ministries and ministerial appointments.

Read details of Obama’s reply:
“Thank you for writing. Serving as the president had been the great privilege of my life, and messages like yours has motivated and inspired me along the way. We should be proud of what we have achieved together.

Through trials and triumphs America has always overcome challenges and emerged stronger because we’ve come together as one people. And our progress depends on folks like you who speaks out on issues that matters to them. I look forward to standing alongside you as a private citizen, making sure our Nation lives up to our highest ideals as a beacon of hope and opportunity.