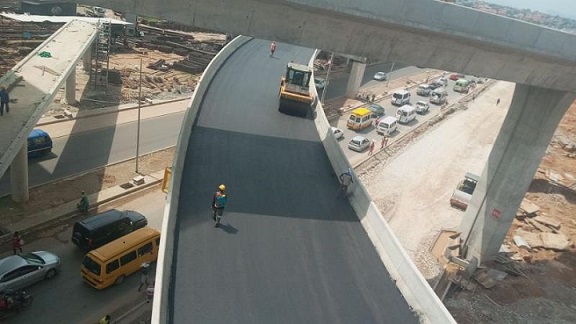 Government will on Wednesday, November 25, open the first phases of the Obetsebi Lamptey and the Pokuase Interchanges under construction to traffic, Mr Kwasi Amoako-Atta, the Minister of Roads and Highways stated on Wednesday.

The Obetsebi Lamptey Interchange, which links Kaneshie, Graphic Road, Kwame Nkrumah Circle and Abossey Okai, is 99 per cent complete while the Pokuase project, on the other hand, is 87 per cent complete.

The projects when completed are expected to ease congestion on the corridor and ensure redistribution of vehicular movement while providing comfort and convenience for motorists.

The Minister, who said this during a working visit to inspect the progress of the projects, explained that although the first phase of the Obetsebi Interchange was expected to be completed next year, the urgency with which the engineers worked, made it possible to significantly complete it before its expected completion time.

Mr Amoako-Atta explained that the second phase of the Obetsebi Lamptey Interchange which would be a bridge overlapping the first phase towards the ‘Accra Central Mosque’ and the third phase, towards the ‘Kaneshie First Light’ would commence immediately after commissioning of the first phase.

The Pokuase Interchange, he said, was ready to serve the public, adding that it was not necessary to complete the whole project before opening it to traffic considering the huge congestion usually on the Accra-Kumasi road.

Mr Owusu Sekyere Antwi, Chief Resident Engineer of the Obetsebi Lamptey Interchange project, explained that they were going to undertake a load testing exercise where physical loads would be placed on the bridge to test its capacity.

Mr Kwabena Bempong, the Resident Engineer, Pokuase Interchange, said the project bridge works were 75 per cent complete and the team was working on the ramps and asphalt.

He said tier one, parts of tier two and three would be open to traffic from next week.

However, tier-four would be delivered by next year March.

He said they were fixing street lights, road line markings and road signs, to open other right and left turn roads to control the anticipated traffic congestion as a result of Christmas festivity.

The 84 million-dollar Pokuase Interchange project, jointly funded by the African Development Bank and the Government of Ghana, was commissioned in July 2018 to promote sustainable economic growth, convenience and safe transportation for motorists and the people of the area.

The project, which is a part of the Accra Urban Transport projects, was awarded to Messrs China Zhongmei Engineering Company Limited.