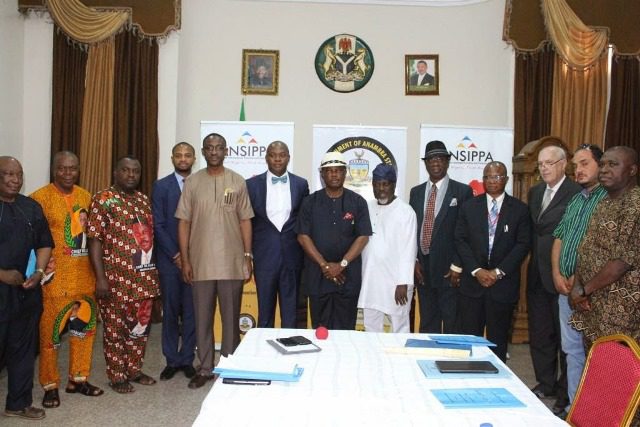 The efforts of Governor Willie Obiano to reposition Anambra State as the new investment hub in West Africa are beginning to yield amazing results as the state attracted a whopping $520m investment in the outgone week. The investments came largely into the two key areas that make up the governor?s Four Pillars of Development, namely Agriculture and Trade and Commerce. The other two Pillars are Industrialization and Oil & Gas. What is currently looking like Anambra?s day in the investment sun began at midweek with a tripartite agreement which the state government signed with the management of Delfarm Limited and Songhai Regional Centre from Benin Republic for specific agricultural projects valued at $200m (about N15bn). This was followed up at the weekend with another agreement with a consortium known as the West Africa Intercontinental Trade Centre Ltd which signed for the construction of an International Modern Market to be located in Ogbunike, Oyi Local Government Area at an estimated value of $320m for the first phase of the project.

These two agreements have moved the government very close to its projected investment inflow of $1.9bn before the end of this year. So far, Anambra has attracted almost $1bn in investments in the last six months averaging $100m investments per month. These investments justify, in concrete terms, Governor Willie Obiano?s reputation as an entrepreneurial banker and a technocrat of note who understands the terrain of high-wired business and the best steps to take to bring the investment world to his doorsteps.

In real terms, the Delfarm Limited/Songhai Farms project is expected to generate 150,000 jobs and cut down the rate of unemployment in Anambra and the neighbouring states. The agricultural project is a fully integrated framework that combines agriculture, technology, industry and services with a sustainable working system and seeks to create training and empowerment centres for the youths. On the other hand, the proposed International Market in Ogbunike is designed to accommodate an ultra-modern shopping mall, an industrial park, education and medical facilities as well as a modern entertainment centre. The project will be executed in phases with the first phase creating about 6000 jobs and 12,000 indirect jobs.

Anambra?s rising profile as the haven for investments in sub-Saharan Africa actually began in May this year when the Coscharis Group made a massive entry into the state?s agricultural sector with $200m investment in a farm settlement, (the Coched Farms Project) in Anakau, Ayamelum Local Government Area. Since then, Anambra has continued to attract investors as the Obiano administration digs in to force through its reform programmes that are intended to lift the state up to its rightful position as the home of entrepreneurship in sub-Saharan Africa.

Since the arrival of Coched Farms, other agro-investors have followed suit. Joseph Agro Limited, Ekcel Farms Limited had penned down a $150m agreement to take over the lucrative Omor Rice Mill and farm settlement while Ekcel Farms had signed in $100 million for the production of cassava and tomato in the state. Grains and Silos Limited has also signed another MoU valued at S11 million for a Silos project and finally, Delfarm/Songhai Farms have also moved in. Other investors like Royal Farms and a host of others are all in line to move into Anambra. There are also talks about a high-level collaboration between the Anambra State Government and some agricultural authorities in Bangkok, Thailand, that will finally divvy up Governor Obiano?s promised agricultural revolution in Anambra State. The state has also attracted investments in the area of tourism with Cardinal Developers and Trust Limited leading the charge in that sector with a considerable financial outlay.

Right at the heart of the investment revolution in Anambra State is the pivotal role of the Anambra State Investment Promotion and Protection Agency (ANSIPPA) which is staffed with seasoned investment bankers and financial experts. This agency has made the process of documentation and other otherwise tedious processes of doing business in Anambra State look like a walk in the park. This has encouraged prospective investors who are familiar with the huge markets and great human capital that Anambra has in abundance.

It would be recalled that flagging off this year?s farming season in a ceremony at Nteje, Oyi Local government in May this year, governor Obiano had firmly set the agenda for his agricultural revolution. Underscoring the importance of agriculture to Ndigbo in his speech at the event, Chief Obiano had recalled that ?From time immemorial, our ancestors judged a man by the strength of his arm. A man who could not feed his family was regarded as an efulefu! A failure! That tells us how important farming and agriculture in general was and will always be to our people.? Setting his sight on the possibilities of Agriculture contributing at least 40% of the GDP of Anambra State, Governor Obiano declared, ?this year, we shall force the doors of agricultural productivity open in Anambra State.?

Written by By James Eze

AFAW Welcomes the Arrest of Prophet Onyeze Jesus in Anambra