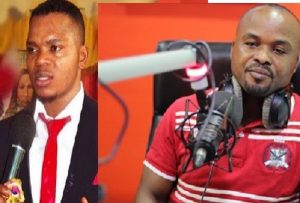 ‘Nana Nframa’ explained that he is not coming out with this confession just to ride on the popularity of Obinim but to expose the evil the self-acclaimed Man of God is made of.

Speaking on Abusua FM’s Drive hosted by Ike Da-Unpredictable dubbed ‘Confessions’, the former fetish priest who practised African religion for 25-years said he visited Obinim’s church after he appeared in him dream.

He claimed he stopped visiting Obinim’s church after he lost all his monies through the payment of consultation fee ranging between GH¢100 and  GH¢200 each time they met.

‘Obinim appeared in my dream so I visited him and told him about my problems of which he promised to help exorcise the spirits tormenting. He promised to convert me and train me as a pastor. I had so much hopes in him. But he deceived me to sell all my properties including my houses and lands, and he promised to transfer money into my bank account during night time but all these were lies. You can’t go there without paying money, you always have to pay consultation fee which I didn’t have, so I stopped going there. I believed him to set me free by exorcising the spirits that were haunting me. He couldn’t drive the spirits that were haunting me’, he alleged.

He revealed that Obinim at a point gave him monies when he had nothing on him expressing appreciation to him.

‘I stayed with him for almost one year before moving out five months ago, I didn’t even tell him when I was moved out. I never paid utility bills nor rent. I was always beaten anytime I departed from him, he wasn’t ready to help me,’ he said.

According to him, after realising that the dwarfs were still haunting him amidst canning, he visited the head Pastor of Open Arms Ministries Saint Sark who delivered him after several encounters with other pastors failed.

He failed to mention names of renowned pastors who have sought his help to promote their churches.

What Did The Roman Father Say?