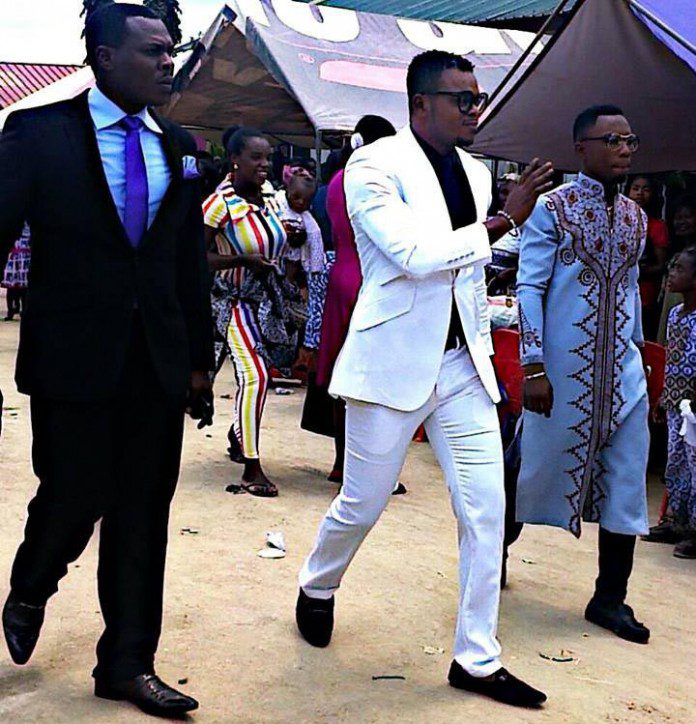 Obinim have been trending everywhere after making it known in an interview that, he can turn into all forms of animals. This video went viral on almost every social media you might have come across with, people are saying he is not a real pastor and others are wowed about his miracles.

One of Obinim’s servants, popularly called Obinim BA Onimuoyamfoo Baggio came to his rescue via his social media page and made the following remarks.

OBINIM’S SERVANT, BAGGIO ON THE RIGHT SIDE OF BISHOP OBINIM

If you have other more convincing reasons why you say Obinim is fake, maybe we can have another conversation, but if your only reason is because he stepped on a woman’s stomach (the woman wasn’t pregnant, it was a tumour), then I will disagree, because Jesus did crazier stuff.

How about he spat thick saliva on the ground, mixed it with mud then slammed it on someone’s eyes; and instead of providing the person water to wash off the mud, he rather worsen the ordeal by sending him to a river that took a journey? If Jesus was a Man of God in town and did that today, I can predict your contemplation; “Oh he is fake, he is not a man of God, Jesus won’t do this ever, no wonder the bible says by their fruits we shall know them…”,

What even baffles me more is that overly-used maxim; by their fruits we shall know them. What fruits? Do you identify fruits by deep spiritual discernment or by just mere physical, human and scientific analysis and observations? Ok, tell me what fruits you will categorise Dr Otabil if one day during Greater Works Conference he held a microphone and it turned into a huge snake? What will you say he is then? Fake? But do you know that’s exactly what Moses did? Was Moses fake then?
What I need Christians to understand is that, God is so enormously vast that it is too myopic to think of Him in such a streamlined manner, to a point we expect him to do things in a certain prejudiced pattern, GOD IS WEIRD AND SOMETIMES ILLOGICAL!

It is true that you can never end up believing every Man called by God, do you know why?

There’s a reason but explaining that in details will mean a complete digression from the subject in focus – when God calls a man he gives the man his own followers whose Spirits will bear witness with his calling, that is why it is so hard to convince an Obinim member that Pastor Chris, Dr Otabil or TD Jakes is a Man of God. Even amongst the “intellectuals” not everyone who enjoys Dr Otabil also enjoys Apostle Sam Koranche or even the anointed but controversial Archbishop!

It is just a clear case of the Greeks who preferred learning (intellectual and scholastic exploration and prowess) and the Jews who rather preferred miracles, signs and wonders (what the bible will call “many mighty works”). None of these two groups are wrong, just a difference and diversity that comes with the beauty and vastness of this one awesome omniscient!
Just to further iron out my point that it is not every genuine man of God that you can believe, remember that even in the bible some people believed John the Baptist rather than Jesus? John had to exert conscious efforts to persuade them that they should rather believe in Jesus!

If the polished and educated Preacher who is called to teach and impact knowledge and expand the learning of the Word is what appeals to you, that is fine, but don’t limit God to your experience and your ideal picture of who a man of God should be! Otherwise you will have campaigned against Jesus for spitting mud in people’s eyes and asked why couldn’t he just stretch forth his hand and command the eyes to open; Spiritual things are spiritual, they can not be fully taken to the university of common sense and argue that a semantic or certain methodology is too odd to belong to the God-realm.

Follow the one whose message you believe, and don’t become a familiar spirit who goes about drawing shallow conclusions about who God called and who he didn’t, most times you could be the one not even called yet…when you receive more revelation and more light, you will be sober and more careful to draw such sensitive conclusions.

READ WHAT HE SAID BELOW!

Leaders advised to rely on Jesus

Jesus’ death has given value to our lives – Pastor Agyin Asare

Madras and Yaa Pono Collabo on ‘Bra Be Gye’