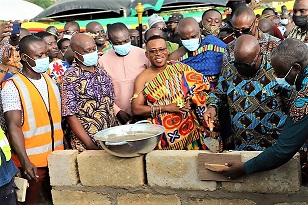 Government will not shirk its responsibilities in developing Obuasi, a mining community in the Ashanti Region, to an appreciable standard, President Nana Addo Dankwa Akufo-Addo has stated.

The vision, according to him, was to build a vibrant local economy through infrastructural growth, especially as related to road expansion, education and health, as well as skills acquisition and job creation.

In the first term of his tenure in 2019, the President launched the Obuasi Mine Redevelopment Project to signal a return to operation of the world’s famous Obuasi Mine, which had effectively been closed since 2014.

The shutting down of the facility resulted in severe socio-economic hardships to the people, whose livelihood was dependent on mining.

“Obuasi has seen transformative development under my Administration,” President Nana Akufo-Addo told a gathering at Obuasi-Bediem when he performed the ceremony for work to commence on a 100-bed District Trauma and Accident Hospital.

The event was one of the activities on his itinerary on the four-day working tour of the Region to inspect ongoing development projects.

Some developments undertaken by the government over the last four years cover the establishment of the Obuasi Campus of the Kwame Nkrumah University of Science and Technology (KNUST) and ongoing construction works on the Anwiankwanta-Obuasi 28-kilometre road.

Messrs. Joshob Construction Limited has been contracted to execute the project, which is about 85 percent complete.

The President observed that resuscitating the Obuasi Mine had helped to revive the local economy in bringing enormous benefits to the people.

On the District Trauma and Accident Hospital, he explained that the facility, on completion, would become one of the major health projects to be undertaken in the Region to create access to healthcare delivery.

Other components are a theatre and surgery ward, washrooms, changing rooms, janitor and sluice room as well as a store and nurse station offices.

Provision will also be made for a decontamination room, administration, reception, circulation, treatment room, health and safety office, IT Manager, server and electrical room.

He appealed to the people to keep faith in the government since the leadership was working assiduously to uplift the living conditions of the citizenry.