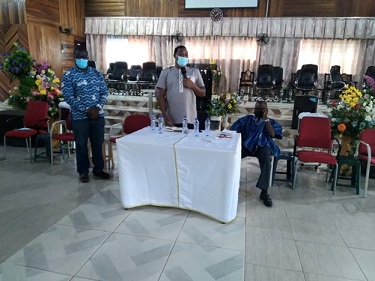 Mr. Elijah Adansi-Bonah, Obuasi Municipal Chief Executive (MCE) has called on residents in the area to honour their civic duties by paying their taxes, levies and fees.

He said though the covid-19 pandemic had had devastating effects on businesses, the assembly needed adequate revenue to be able to provide the needed socio-economic facilities to improve the lives of the people.

Speaking at a town hall meeting to discuss the 2022 fee-fixing resolution with the various stakeholders in the Municipality, he said the revenues were needed to ensure the economic stability of the assembly.

The meeting was to solicit inputs for the business community, entrepreneurs and the citizenry in agreeing on what was reasonable to charge as fees and levies by the assembly in the coming year.

Mr. Adansi-Bonah outlined the various developmental projects, both ongoing and completed by the Assembly as school infrastructure, road network, health facilities, and sanitation facilities in the various communities in the municipality.

He also mentioned a number of projects that the Assembly had lined up to start next year to include; a two-storey clinic with accommodation at New Nsuta Auntie B near the Obuasi Central Market, completion of school blocks at Sanso, Bogobiri and Kokoteasua as well as some road projects in the Obuasi township.

The MCE advised residents of the Municipality to pay their levies to the Assembly as part of their duties and obligations to ensure the successful completion of the projects for the benefit of the people.

Ms. Edna Vivian Arkoh, the Municipal Budget Analyst in her presentation said the Assembly had taken into consideration the impact of the covid-19 on businesses in the municipality, adding that, there had not been major increases in the various revenue items.