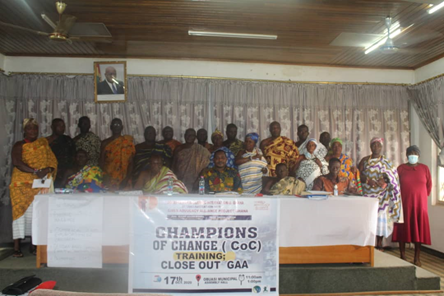 Some traditional rulers in the Obuasi Municipality have welcomed the idea to play central roles in child protection and upbringing in their communities.

Nana Owusu Achaw, Chief of Bogobiri, a community in the Obuasi Municipality, together with other sub chiefs and queens at a ‘champions of change’ meeting held in the community, said issues of children were critical, and traditional leaders must not relent in championing change for children.

He said it was the responsibility of traditional rulers to strengthen advocacy on ending abuses of children, ending commercial sex exploitation, reducing gender-based violence and promoting technical, vocational and educational training (TVET).

The meeting was organized by the Defence for Children International Ghana (DCI-Ghana) in collaboration with Girls Alliance Project Ghana to equip young people, especially girls with relevant skills and training in Obuasi.

The meeting was also used to orient traditional rulers on the strategies for effective behaviour change in children and consultation with target groups such as parents, guardians and community social workers.

Nana Owusu Achaw who was the convenor for the meeting indicated that the role communities played in child upbringing was vital and should not be downplayed.

He called on all members of the community to make child protection issues their business and help churn out responsible adults.

Madam Aba Oppong, the facilitator for the programme reiterated the need for the traditional leaders to be unifiers in their communities.

She further explained that in their capacity as traditional leaders, they were also leaders in child protection and agents of change in their communities.