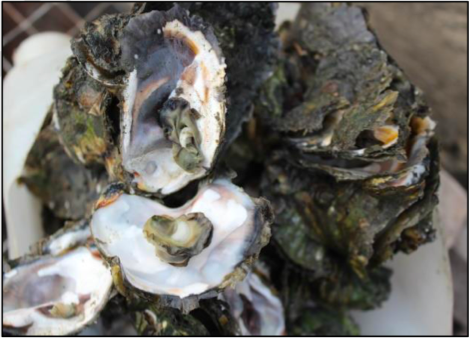 It is not captured in the fisheries basket of Ghana as a major fish source, but oyster and clam business employs more than five thousand women.

Historical perspective
In the Densu and Volta Estuary alone, nearly 6000 (direct and indirect) are actively involved in the trade.
Maamle Ashilfi, 60, a resident of Tetegu, in the Ga-South Municipality of the Greater Accra Region of Ghana and her five other siblings have solely depended on the oyster business for livelihood.

For well over 25 years, the Oyster business has been the backbone of the single mother of four. She recalls that through that business, she paid school fees, rent, utilities and healthcare bills.

Oyster harvesting, processing, and sale is a unique set of skills passed on to her by Maamle’s late mother.
She has bequeathed the skills to her eldest daughter Naa Ajele Blankson. However, Naa has not worked in the sector after taking over from her mother with drastic change in the business.

“In the past five years, oyster yields have reduced in two folds and the sizes are very small. We used not to travel more than 10 minutes to harvest oyster, but now it takes more than 50 minutes to get few to harvest,” she said.

Naa is not the only one expressing such concerns, but oyster and clam pickers in Ada and Keta communities in the Greater Accra and the Volta Regions have equally bemoaned the dwindling nature of the resource.

Ime Bassey said: “Yields have fallen significantly. Before now, a trader may have 100 containers (five kilogrammes) of oysters in a week during the peak season with market rate of 2,100 Naira. Now it has reduced to 40 containers and it’s far less”.

Oysters are valuable resources; no part is wasted off. Madam Dorcas Asante, a nutritionist at the Accra Ridge Hospital told the GNA that shellfish such as oysters and clam have high essential vitamins and minerals such as protein, iron, omega three fatty acids, calcium, zinc, and vitamins C.

Naa said the demand was high even within the communities. “We do not have a special market for it, after frying or drying the meat it is sold in the community Markets,” she said.

Oysters are mostly fished from the Volta River and only sold in few markets around the country due to a lack of proper processing and preservation methods.

Naa says they used to sell to poultry farmers, paint producers. Esthetically, other people bought the shell to use it in landscaping, replacing gravels and tiles, when paired with cement it is used to design beautiful pavements, and interiors.

Mr Kofi Agbogah, Director, Hen Mpoano, a local non-governmental organization, said clam and oyster fishery had great potential to transform livelihoods, generate incomes and reduce poverty around the local communities. However, the economic importance of the clamshell for industrial use is currently undervalued.

All the women the GNA interviewed observed that the ecology of the sea and estuary was not the same as 10 years ago. They said there was a drastic degradation of mangroves and the sea had taken part of the shores in communities in Keta in Volta Region, Ada and Densu in Greater Accra Region.

Enobong Sunday, an oyster and clam picker in Nigeria, is not able to explain the cause of the change in yields, saying that “the world has changed”.

“These changes have made things really difficult as we cannot have as much catch and sales as before.”
Dr Edem Mahu, a Lecturer, the Marine Biogeochemistry, University of Ghana observed that oysters are increasingly under threat from rising sea temperatures and erratic rainfall linked to climate change, as well as over-harvesting and pollution.

She is leading a study under the Fellow, FLAIR Fellowship Programme to gauge and forecast impacts and provide scientific advice on sustainable management and adaptation.

“We are seeking to understand how the environment has changed over the years and its effect on oyster growth in the Densu and Volta coastal area. The study will look at the ecology in Ghana, Sierra Leone.

It will assess the past PH and temperature to offer advice to stakeholders on how to sustain the resource,” Dr Mahu said.

Lenton, A., Matear, R.J., Mongin, M. (2018), study confirms that the ocean acidification has the potential to significantly impact Pacific Island ecosystems and the ecosystem services they provide.

There is compelling evidence that the ocean has become more acidic in response to rising atmospheric CO2 levels.

It revealed that once the system becomes acidic, it will affect the growth of the resource because they have to adapt to the condition and in the process more effort and energies are channeled to building shells.

He explained that the limit of clam and oyster distribution within the respective estuary in recent decades was the approximate limit of penetration of saline water from the Atlantic Ocean.

However, climate-induced sea-level rise and associated increase in salinity and saltwater intrusion are pushing the frontiers of saline water further upstream.

“We have observed that the salinity is going higher and the oysters and clams are moving to more blackish area-where there is a mixture of fresh and salt water. This is where they are able to thrive,” he said.

Mr Agyeman confirms that between eight to 14 meters of land is lost to the sea every year. He said about twenty years ago, Fuvemeh was a thriving community of 2,500 people, supported by fishing and coconut plantations that are now completely underwater.

Gradually but inexorably, the ocean has swallowed up hundreds feet of coastline, drowning the coconut plantations and eventually sweeping away houses.

Climate Change Assessment
The assertion confirms that project of Ghana’s Climate Change Vulnerability and Adaptation Assessment, that the coastal regions of Ghana may be vulnerable to sea?level rise.

Coping with the challenges

Often described as the ‘minority tribe’ shellfish contribute to livelihood, nutrition, food security and could be the next big ‘gold’ resource.

Mr Agbogah who is also a Fisheries Advisor at the USAID/Sustainable Fisheries Management Project said local and international non-governmental organization has worked with the Fisheries Commission to put together Co-management Policy.

The policy, which currently is at Ghana’s Attorney General’s Department waiting for a final sign off seeks to guide how the fisheries resources of the country are managed, both marine and inland including shellfish.

“It is a strategy for managing fisheries resources through shared responsibility among government, resource users and other key stakeholders. Globally viewed as an accepted best practice, it is considered an effective approach to enhancing community participation in decision-making and adherence to rules and regulations. Co-management provides opportunities for fisheries management options that are precautionary, adaptive and flexible,” he explained.

He mentioned that some of the management structures include; unionizing the people to start Village Savings and Loans Associations, registering them with the local District Assembly towards securing their tenure and user rights.

According to Mr Agbogah it is expected to result in economic empowerment, creation of diverse job opportunities, livelihoods and new income streams for the youth of the area, especially in value addition to the clam/oyster meat and shell.

Madam Lydia Saasu, the Director of Densu Osyter Pickers Association, said some of the co-management practices such as close season of five months (November and mid-April) have been instituted to enable regeneration.
Locally, she stated that limits have been set to volumes and the number of days of continuous oyster harvesting allowed during the harvesting season.

They have set up two oyster shells dumping sites in each of the three harvesting communities to be used for semi-annual oyster reef restoration activities.

Although these co-management strategies could help, when fully on stream and implemented effectively, how to deal with ocean acidity and sea rise is yet to be answered as we wait for the recommendation of Dr Mahu’s study .
The voice of many local women especially Enobong Sunday echo’s, “These changes have made things really difficult as we cannot have as much catch and sales as before.”

This feature was written as part of the Africa21 Media and Journalism in Africa Days 2020: Climate Change in Anglophone Africa

When a Country is INDEPENDENT!