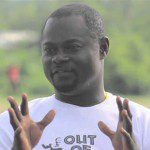 Ex-Ghana international Nii Odartey Lamptey has revealed he would jump at the chance to return to Kotoko as the club?s coach.

The 40-year-old has gained experience as an assistant coach at second-tier side Eleven Wise since calling time on his career in 2008.

Kotoko current coach David Duncan is under mounting pressure to quit following a difficult debut season with the champions.

Already there have been talks about a potential replacement with Turkish trainer Telat Uzum heavily linked with a return to the club.

But former Ghana midfielder Nii Odartey Lamptey has revealed he would welcome a return to the club as their new man in charge.

?You can never say never in football and it can happen and personally if Kotoko offer me the coaching job because they believe that I can do it, why not,? he told Kumasi-based Ultimate FM

?Pep Guardiola and Luis Enrique are proving that given the job, former players can also do a good job as managers or coaches.?

Duncan has insisted he will not buckle under pressure despite his poor reign which sees the side struggle for survival in the top-flight.