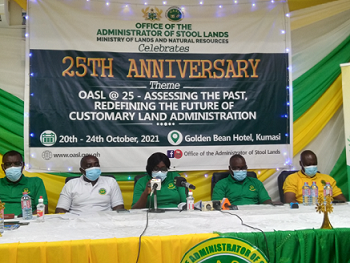 The Office of the Administrator of Stool Lands (OASL) on Wednesday held a media engagement in Kumasi as part of activities to mark its 25th Anniversary and to improve its visibility.

Maame Ama Edumadze Acquah, the Administrator of Stool Lands, took the media through activities of the Office and the significant role it plays in the country.

She said the OASL, which was one of the institutions under the Ministry of Lands and Natural Resources, was established in October, 1996, with the mandate of enhancing stool land revenue mobilisation and disbursement.

It is also responsible for facilitating the sustainable development and efficient management of stool lands for the benefit of present and future generations, she said.

“Previously, the functions of our office were being performed by the Lands Commission but following the promulgation of the 1992 Constitution our office was set up in 1996,” she explained.

Maame Acquah said the OASL was currently operating in eight regions with 104 district offices as well as 10 satellite offices.

“Our core mandate is to collect rents, dues, royalties, revenues or other payments whether in the nature of income or capital and to account for them to beneficiaries,” she stated.

In line with Clause Six of Article 267 of the 1992 Constitution and section seven of the OASL Act 481, the Office disbursed the revenue collected to the beneficiaries including the stool, traditional authorities and the district assemblies, Maame Acquah said.

“We are to retain 10 per cent of whatever we have collected to cover our administrative expenses. 25 per cent of the remainder is given to stools, 20 per cent to traditional authorities and 55 per cent to the Metropolitan, Municipal and District Assemblies within the area where the revenue is generated,” she said.

She said the OASL also had the mandate to monitor the utilisation of the revenue disbursed, saying projects undertaken with stool lands revenue must be labeled to show accountability to the public.

The Office, she said, would soon come out with guidelines to ensure proper monitoring of such projects in the interest of accountability.

The Administrator indicated that the Office had over the years upheld its core values of transparency, equity and accountability and would continue to work closely with relevant stakeholders to ensure stool land revenues were used for the benefit of the people.

She mentioned the lack of office space, maltreatment of revenue collectors, and the conversion of stool lands into farmlands as some of the challenges the Office faces and called for stakeholder cooperation to effectively perform its duties.