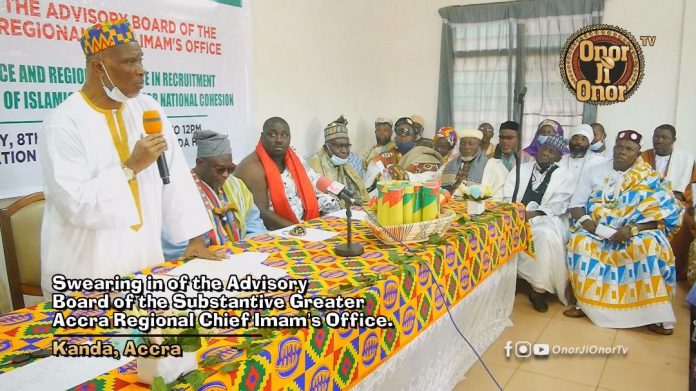 He said the core mandate of the Board was to advise and formulate policies for the office of the Regional Chief Imam’s Office to propagate, educate and preach peace about the Islamic Religion and other religious practices.

Sultan Caesar made the call on Saturday at the inauguration of their first Advisory Board in Accra.

The Board is to help steer the affairs of the office and to ensure the good welfare of Muslims in the region.

The Board purpose was also to advise the Regional Chief Imam’s Office on how they could streamline development to the benefit the Muslim communities in Greater Accra and beyond.

He said there was the need for Regional Chief Imam office to structure the regional chief imams office so well to help bring development to the doorstep of everybody in the region.

Sultan Caesar said the inclusion of most of the Heads of every tribe or ethnic groups in the board indicated the commitment of the office to bring unity into the Muslim Umah in the region.

This, Sultan Caeser said would minimise the marginalisation of Muslim children in various Schools across the country.

The New Chairman of the Advisory Board in his address said, he was glad to be part of such a group of people to help in shaping the progress of Islam in the region.

He said the board members including himself would conduct the business of the board in compliance with the constitution and bylaws of the Regional Chief Imam’s office to help bring progress to Muslims in the region.
Present at the ceremony also was legal practitioner Lawyer Bright Akwetey