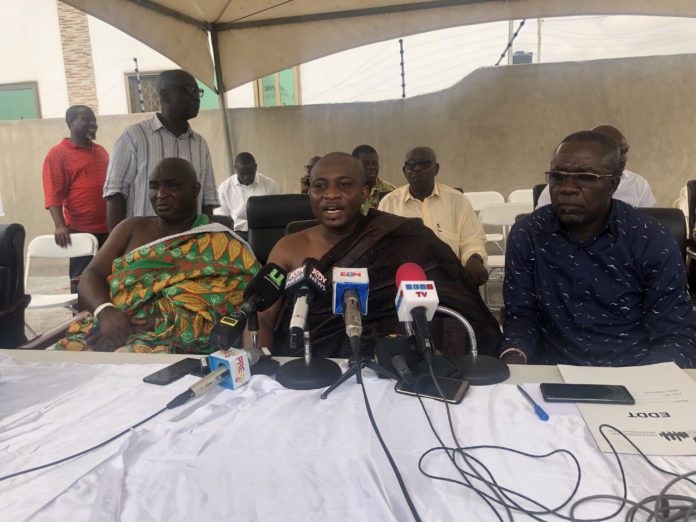 The East Dadekotopon Development Trust (EDDT or Trust), at a press conference held at its premises on 25th February 2018, put out information that the Ataa Tawiah Tsinaatse and Ofoli Kwashie families have no land measuring 808 acres or more at Tse Addo, East La.

According to the EDDT, per an Appeals Court Judgment dated 29th November 2018, in a civil appeal case titled “ADOLPH TETTEH ADJEI VRS ANAS AREMEYAW ANAS & HOLY QUAYE”, the Appeals Court held that the Judgment of Abada J dated 3rd March 2016, which formed the basis on which a Land Certificate with number GA.55820 was issued to the families is “contrary to law and procedure and same is null, void and of no legal effect”.

The Court further held that “the judgment of the Court of Appeal in the suit titled The Ag. Registrar of Lands and the Trustees, East Dadekotopon Development Trust v Edward Mensah Tawiah and Ewormienyo Ofoli Kwashie (Substituted by Edward Nsiah Akuetteh) is still valid and operative, and that being the case the Land Certificate issued to the Trust still held good at all material times”.

The aforementioned judgement is a Consent Judgement under which 15 acres of land was given to the Ataa Tawiah Tsinaatse and Ofoli Kwashie families as final settlement for their interest in the Trust land.

This therefore leaves the Appeals Court Judgement dated 29th November 2018 as the current standing legal authority on the status of the East Dadekotopon Development Trust Land.

The press conference by the EDDT was necessitated by the activities of alleged landguards being used by the Ataa Tawiah Tsinaatse and Ofoli Kwashie families to terrorise owners and occupants of the Trust land.

The alleged landguards are being led by one Seriki Awala who is alleged to have links with the office of the national Chief Imam, the Vice President and the top hierarchy of the Ghana Police Service, hence his claim of being untouchable.

In spite of the foregoing the families have ironically turned around to ‘play the victim’, and attempting to court public sympathy by accusing the Ghana Police of harassment.

The Trustees believe that it is important to correct any false impressions created and also to put the entire issue into proper perspective having regard to the several legal pronouncements regarding the ownership of the Trust Land as well as the status of the Land Certificate issued to the Trust in 2003.

As it stands the Land Certificate issued to the East Dadekotopon Development Trust is valid and effective. The Trust kindly urge all state agencies including the Police, the Lands Commission, the La Dadekotopon Municipal Assembly to take note of the recent developments and act in accordance with the current legal authority as regards the status of the Trust Land.

The Trustees of the Trust have in spite of provocation, always resorted to the law and to the courts to address issues and intend to continue to do so. The Trust is therefore appealing to all its grantees and other lawful occupants of the Trust Land to be patient while it takes lawful steps to sanitize the situation on the ground and safeguard the land.