The alertness and bravery of the Offinso police has foiled a robbery attack on a group of traders, traveling to the Abofour market from Kwapanin. 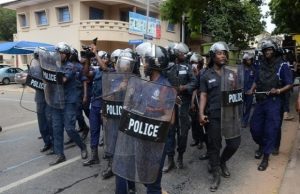 A gang of robbers, numbering eight, had blocked a section of the 10-kilometre road with logs to stop vehicles carrying market women – to seize and make off with their cash and other valuables.

Police officers on routine patrol arrived at the place on time to engage the criminals in a firefight.

Assistant Commissioner of Police (ACP) Edward Oduro Kwarteng, the Divisional Commander, confirmed this to the Ghana News Agency (GNA) and said the robbers on seeing the police opened fire and that was returned.

Overwhelmed by the firepower of the police they melted into the nearby forest.

He said two traders, whose motorbikes had been seized and ordered to lie on the ground by the robbers just before the officers got to the scene were rescued unhurt.

He gave their names as Kofi Badu and Samuel Kpor.

ACP Oduro Kwarteng said no arrest had been made but gave the assurance that they were determined to go to every length to apprehend the criminals and bring them to justice.

They would continue to work with commitment and passion to make things uncomfortable for anybody who had chosen to live outside the law.

He applauded his men for the high sense of professionalism and encouraged the people to support the crime fight by flagging up criminals to the police – provide them with useful leads.

Mr. Kpor, one of the victims, had earlier narrated to the GNA his harrowing experience.

“My sister, it was like a war movie – simply nightmarish, and I can only thank God and the police for my life.”