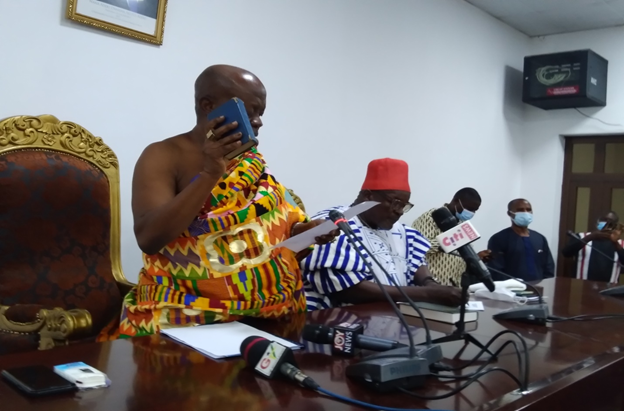 Ogyeahohuo Yaw Gyebi II, the Paramount Chief of Sefwi Anwiaso, has been elected as the new President of the National House of Chiefs at a meeting of the House in Kumasi on Thursday.

He obtained 47 votes to beat the incumbent, Togbe Afede XIV, Agbogbomefia of the Asogli State who secured 25 votes.

The election, which was supervised by the Electoral Commission also saw Naa Puowele Karbo III, Paramont Chief of Lawra Traditional Area being elected Vice President of the House after polling 44 votes as against 28 garnered by Daasebre Kwebu Ewusi VII, the Abeadzehen.

Prior to the election, members of the newly constituted house were sworn into office by Mr. Justice Kofi Akrowia, a High Court Judge.

Meanwhile, seven members of the house, including all five representatives from the Western Region, the Ga Mantse and the Paramount Chief of Nkoranza Traditional Area were not sworn in for various law suits restraining them to be members of the House.

Ogyeahohuo Gyebi, in a speech called for a united front to build a strong chieftaincy institution to contribute meaningfully to national development.

He said he would not only be a leader of the House but also the chief servant and pledged to involve members in all decision making in order to build consensus on issues tabled for discussion.

He urged the chiefs to play their respective roles as traditional leaders effectively to ensure a peaceful election in December.