Residents in Okaikoi Central, despite representation in successive governments, continue to register displeasure over unpleasant conditions in the Constituency. 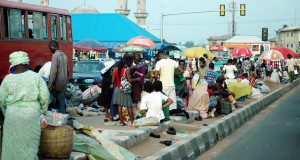 A stroll through vicinities within the Constituency shows common sights such as haphazard layout of buildings, scenes of refuse and human excreta, poor drainage systems, poor demarcation of roads, presence of gangsters (wee smokers), lack of dustbins among others.

Though quite resourced, Okaikoi Central is beset with the lack of proper toilet facilities. It is on record that many households do not have toilet facilities, which has consequently created a situation whereby the people indiscriminately dispose faecal matter anywhere especially at night.

The presence of a huge unattended drain compounds the problem even more. This huge gutter has remained as a fertile breeding ground for mosquitoes and has served as an avenue for disposing refuse, of all sorts, choking the drain without recourse to the resultant health implications.

This situation coupled with the poor layout of settlements, residential or otherwise has inadvertently led to flooding whenever there is prolonged rainfall.

A locality such as Botwe and environs are flooded due to the inability of the water to pass through the drain as it is choked beyond measure.

Many residents and even the Member of Parliament; Mr Patrick Boamah, for the area have given confirmation of the occurrence of health-related issues resulting from poor sanitation.

Madam Josephina Mettle, a resident said previously, in the absence of the household toilet facility, they used to have what she referred to as the ‘pan latrine’. However, the government demanded that they quit its usage.

She narrates that immediately after they stopped using the pan latrines, a private agency came to initiate the process to build a proper toilet. However, after they dug the manhole and procured other materials, they disappeared.

Daniel Tetteh Bodey, another resident also explained that it seemed as though the “government has forgotten about this particular area”. He said inroads connecting the interior areas to the major streets have been encroached upon by residents posing a great difficulty in accessing the main roads.

To him, laws have failed to work and enforcement agencies, it seemed were more relaxed than necessary.

He said he could not understand why a road linking the blue gate to the main station had been blocked preventing vehicular access to that route.

Meanwhile residents point accusing fingers toward the Assemblyman of the area.

In their estimation, he has not done anything in his capacity to develop the area with regard to the provision of social amenities and infrastructure.

He noted that in 1996, the construction of the main roads was awarded to the then Assemblyman. In 1998 the project was commenced and was not completed until 2008-2011.

Quite unfortunately however, the work was improperly supervised. Consequently, some portions of the road have developed potholes.

Residents are therefore pleading with the authorities in the Constituency to enforce laws and ensure that the right things are done.

They also request the District Assembly and the Accra Metropolitan Assembly to address their grievances as a matter of urgency to help prevent the outbreak of a pandemic in the area.