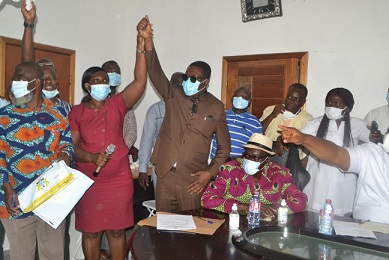 All the 16 members of the Okaikoi North Municipal Assembly in the Greater Accra Region unanimously confirmed Mr Boye Laryea, the re-nominated Municipal Chief Executive (MCE) for the area.

Mr Laryea in an address expressed gratitude to the President for re-nominating him and the members for the confidence reposed him to serve the municipality for another term of office.

He gave the assurance that the area would continue to witness massive development in many fronts while calling for all hands on deck to support his administration.

Mr Laryea said his administration would work together with the people to justify the confidence reposed in him and he would make sure that the municipality benefitted from government’s flagship policies and projects.

Mr Henry Quartey, the Greater Accra Regional Minister who graced the occasion urged the MCEs to make the assembly structures work devoid of politics and that the unanimous endorsement by some of them indicated that the residents yearned for development.

He called on leaders of other political parties to contribute their quota to the work of the assemblies, saying; “we need to work beautifully to give our people what they desire from us.”