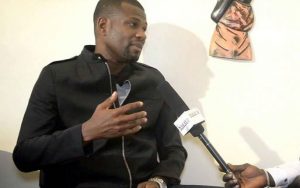 Music Producer Mark Okraku Mantey has disclosed he was offered the post of Deputy Minister of Tourism, Culture and Creative Arts but he rejected it.

He told JOY FM‘s Mamavi Owusu-Aboagye, he declined the position because he doesn’t want to be seen as someone whose interests is only in the arts, and also because of the lack of support from personalities in the entertainment industry.

“My political ambitions would not be destroyed by the creative arts…. anytime someone from our space takes up a position; the agenda is to bring him down and I don’t want people to think that all I can do is creative arts. Don’t box me into creative arts when I can do other things.”

Okraku Mantey declared his support for Kwadwo Antwi as the potential candidate for the position of Deputy Minister for Tourism, Culture and Creative Arts.

He told HITZ FM‘s Merqury Quaye Wednesday afternoon he will go ahead with the lawsuit. He confirmed having a chat with Sarkodie and someone claiming to be his lawyer earlier.

“The calls were actually back to back because I dropped this line and the other one followed. We were supposed to have met today [Wednesday] but I told them I would not be around because I’m going to Kumasi to pay homage to Asantehene. The lawyer who called said she was Sark’s lawyer and she’s sure I know why she was calling and I said yes. The import of the call is that we need to talk,” remarked Okraku-Mantey.

“She said it’s not like they are being disrespectful about hearing that I didn’t like the way they went about my song but she was out of town and that was the reason for the delay in sitting down to talk.”

He added that he had no plans of backing down on the lawsuit until the right thing was done: “No! Until we meet and I hear their sides and how the talk will go will inform us as to what to do next.”

Music Producer Mark Okraku-Mantey is threatening to sue rapper Sarkodie over his cover of the song Kokooko.

Okraku-Mantey is not happy about the latter sampling the song he produced without his permission and has threatened to seek redress in court.

Kokooko was one of the songs that gave Daasebre Dwamena mainstream acclaim and featured Lord Kenya. The artistes were both signed to Okraku-Mantey’s music label, Slip Music.

The tribute song debuted at Sarkodie’s RapperHolic concert at the Accra International Conference Center on December 25, 2016.

Read our earlier story below.

Music Producer Mark Okraku Mantey has explained the reasons behind his threat to sue rapper Sarkodie for sampling Daasebre Dyamena’s song Kokooko which he produced.

Okraku-Mantey says he wants to seek redress in court to get the right thing done and not as a result of jealousy as some people believe.

“Under normal circumstance if he had called me to say that he is doing Kokooko remake as a tribute to Daasebre, I would have just said ‘go ahead’. I want to hear it sound good or even better. The most important part of this whole thing is how it sounds funny. I didn’t hear anything from him only to see Jon Germain send me a link and when I opened it, I heard my song playing so after hearing my song play, I said at least show me some respect,” said Okraku-Mantey when he appeared as a panellist on Pundits on GhOneTV Tuesday evening.

The Slip Music owner adds the response from Sarkodie and his team will decide whether he will head to the court for a decision to be taken.

“I want to see the steps he will make. If he doesn’t make any steps then it gives me a clue that he doesn’t want to respect the industry then we will use him to set example for the younger ones to learn from it. All these court cases are precedents so if we set one for others to learn from it, there is nothing wrong.”

Minister urges Ghanaians to cultivate the habit of tree planting