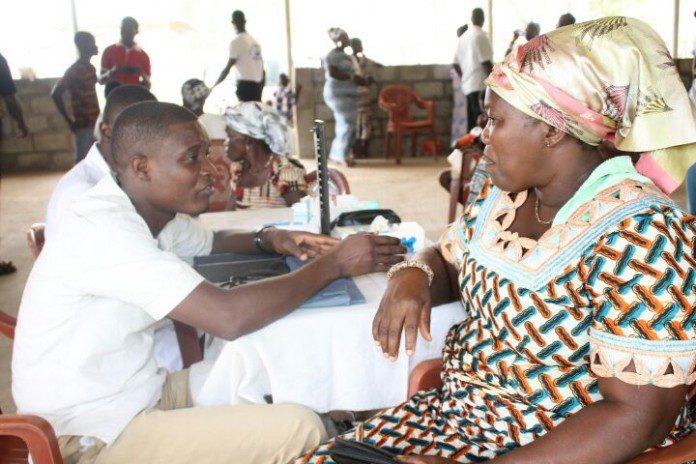 Many of the beneficiary children were diagnosed of severe anemia. There were also some with high sugar levels and they were referred to the hospital for further checks.

The exercise formed part of the launched the sixth edition of the Foundation’s health program, “health-line” – a television health talk show designed not only to educate the public on various diseases but help fund the treatment of poor people suffering from chronic diseases.

It comes with a call centre, which affords the public the opportunity to call for free medical advice.

Ms. Agnes Emefa Essah, Marketing Director of the Telecommunication Company, said it was its contribution to the promotion of access to quality healthcare.

She invited the people to take advantage of the programme to get answers to their health needs.

She spoke of plans to visit people who had been supported by the company to undergo surgery for treatment of various medical conditions to assess their level of recovery.

She announced that it had over the past five years paid for the surgical treatment of more than 30 patients.

Mr. Ebenezer Amankwah, Vodafone’s Head of Corporate Communications, said they were targeting people, who could not afford the cost of health care for assistance.

He indicated that, every year, a community which needed basic healthcare was chosen across all the regions, where the residents were screened for various diseases and medicines supplied freely to them.

Those whose cases are found to be serious are referred to the health facilities.

Dr. Ralph Owusu Sekyere of the Koforidua Regional Hospital, encouraged the people to go for regular checkup and to adopt healthy lifestyles.