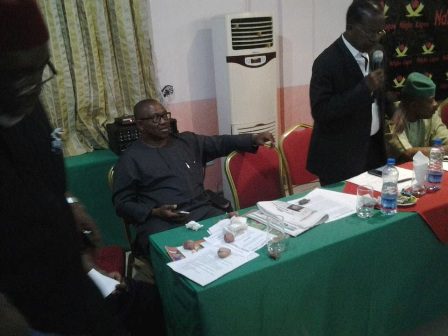 Now many hearts may have made peace with OKWUTE NDI IGBO moving up his calling into the heart of the nation.
A man that gave his all to resurrect APGA after CHEKWAS OKORIE sold it to PDP in 2003 ,when he collected the sum of 20 MILLION NAIRA and handed APGA to NGIGE .When same Peter Obi went to court to reclaim his winning ,CHEKWAS told him point blank that “PETER OBI ,you are on your own,we as party will not support you ,leave Ngige and PDP alone,we do not want to contest the election result”. Well it took him 3 years plus to get back the mandate and with him we have ANAMBRA HOUSE OF ASSEMBLY made up of APGA ,we have house of Reps members,we have Senators and we have another State won by APGA .
With Obi,APGA became the 3rd most popular party and sought after in NIGERIA.
The good news is that ,,,

He is yet to sale IGBO interest and will always bring the best to Alaigbo ,He never sold out and if had choosed ,would,ve buried APGA long ago by accepting the HONEY COMB giving to him by OBJ,YARA DUA and GOODLUCK to hand Anambra to PDP but he did not and now that he,ve put in his best and handed over to another APGA CANDIDATE who will carry it on from where he stopped ,he moved to get us a Bigger bacon from the Central and the only way to get it from National Party and the one that controls.

Peter Obi said yesterday and i quote “I NEVER LEFT APGA BECAUSE I HAD PROBLEM WITH ANYBODY ,I NEVER LEFT APGA BECAUSE THE PARTY OFFENDED ME ,BUT I GAVE APGA MY BEST AND PRODUCED SOMEBODY WHO IS CAPABLE AND WHO SHOULD ALSO TAKE APGA TO HIGHER LEVEL,OWING TO WHAT HE MET ON THE GROUND..I LEFT APGA TO MOVE UP TO CENTRAL TO MAKE SURE THAT NDI IGBO GOT IT RIGHT AND WILL ENJOY WHAT IS DUE FOR US”

LET ME QUOTE Jude Okoye on his facebook page and i provide
“Anyone that denigrates Obi’s choice does not
know what he is talking about. First off, he has a
right to belong to any party he chooses under the
law. Secondly, he did not leave APGA, APGA left
him. Thirdly, he did not decamp from APGA with
his governorship mandate. He almost single-
handedly built and nurtured APGA from the
scratch to be force to reckon with. When he was
won his case in ’06, and became governor, APGA
had no member in the Anambra House of
Assembly. Under his leadership, APGA won about
2/3 of the house seats, won seats in the National
Assembly and swept the last LG elections. He
made lots of people to decamp to APGA due to his
brand of leadership. He was the only APGA
governor before Okorocha came by. He sustained
the party for 8 whole years and left it better than
he met it. He won the election for Gov. Obiano and
handed over the party machinery to them. Now,
those that thought that they own APGA cannot
even hold it together for 3 months. It is quite a
shame that they cannot manage success. Now
they would blame Obi. In Igbo we say, “agaghi m
anulu gi nwanyi, kpoo kwulo gi ute”-one cannot
sponsor your marriage and also buy you a bed
where you would sleep with your wife.”end of quote

Today ,we can beat our chest and say ,we are rest assured that nobody can push IGBO AROUND any more with capable hands like Obi ,with a man with great love for his people and with his moving to central to join and monitor events ,i can say that the marginalisation will be reduced to barest minimal.

NGO wants career education to be incorporated into educational curriculum