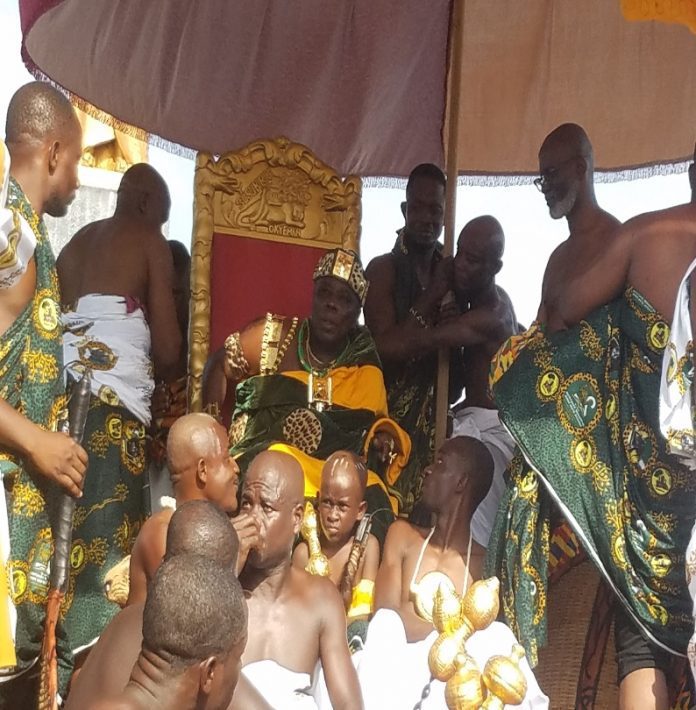 The Okyehene, Osagyefuo Amotia Ofori Panin, has called for concerted efforts to find long lasting solutions to many chieftaincy disputes bedeviling communities before they escalate and destroy the country.

He said, often times, disputes were seen as issues for traditional authorities, but the destruction that it caused went beyond the walls of traditional establishments and affected the whole society.

Okyenhene was speaking at the durbar of chiefs and people of Akyem Abuakwa to climax the celebration of the 20th anniversary of the enstoolment of Okyenhene at Kyebi in the Eastern Region.

He regretted that during an outbreak of chieftaincy disputes, the security did not go to traditional councils to find out documented traditions of the areas with regard to enstoolment of chiefs and who was the traditionally and officially recognised chief.

According to him, the security agencies would then allow all factions to operate without such thorough assessment of the traditions leading to avoidable clashes, loss of lives and destruction of property.

He observed that though there were chieftaincy disputes in the Akyem Abuakwa traditional area, the traditional council took measures to resolve many of them.

The Okyehene commended the Asantehene, Otumfuo Osei Tutu II, for leading a group of eminent chiefs to resolve the Dagbon chieftaincy dispute, bringing peace to the area.

Though, he commended Government for introducing the Free Senior High School (SHS) concept, he called for a second look at the content of the country’s educational system.

He also suggested that the focus of Ghana’s education should be on science, mathematics and technology “if the educational system is to contribute to the economic development of the country.”

Okyenhene urged President Nana Addo Dankwa Akufo-Addo who was also at the durbar to return the bill for amendment of article 55 (3) of the Constitution to parliament and initiate an elaborate public education and consultation for people to understand and appreciate the need for the constitutional review and support for it.

He called for some ministries and head offices of departments to be relocated to the administrative regions to help decongest Accra, the national capital and open up the regions for rapid national development.

He expressed concern about the poor performance of some government appointees and said he was not going to recommend or suggest anything to the President because he knew what to do.

He invited black Americans, many of whom were present at the durbar, to invest in Ghana and assured them that the laws of the country allowed them to repatriate their profits to their home countries.

But, said what was required of them was to leave behind legacies for the benefits of local communities, where they would work.

The Ya-Na Abubakari Mahama II, in a speech read on his behalf, called for the replacement of the Council of State with a Second Legislative Chamber to be made up of chiefs and eminent citizens with the responsibility among others to appoint heads of some state institutions like the Auditor General, Electoral Commissioners and heads of security services to help protect such offices from political interference.

He also called for determined efforts to remove the winner-takes-all situation in the country’s politics.