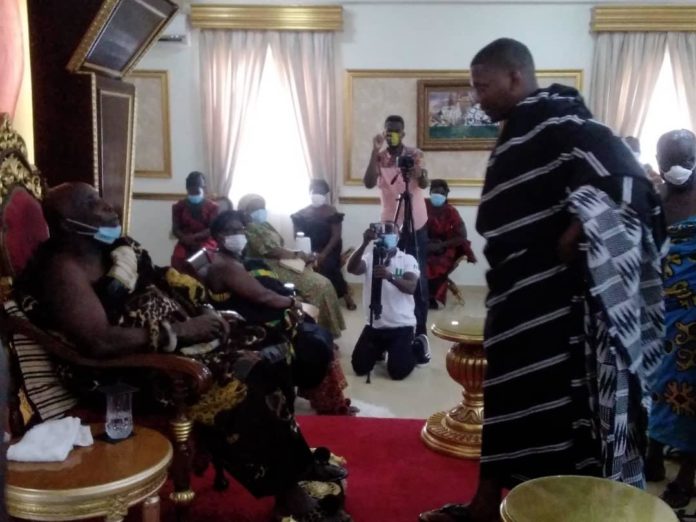 Osagyefo Amoatia Ofori Panin, Okyenhene has called on people of Akuapem to support the newly installed chief for peace and unity to remain in the area.

The Okyenhene indicated that the struggles and misunderstanding that characterised the enstoolment of the new chief was past and gone and must not eat into the hallmark of Okuapeman’s peace.

He said the people of Okuapeman owed it as a sign of respect and support to the President Nana Akufo-Addo who hails from the area to allow peace to prevail.

The Okyenhene made this comments at the Kyebi palace when the new Okuapemhene Oseadeyo Kwasi Akuffo II was introduced to him in line with custom and tradition.

The Okyenhene admonished the new Okuapemhene to listen to advice from his elders and the people who gave him the authority.

He reminded Oseadeyo Kwasi Akuffo, not to allow anyone to despise his youth and assured him of the support of Okyeman.

The Okuapehene who ascends the Okuapeman stool known as Ofori kuma is regarded by tradition as the nephew of Okyenhene who sits on the Ofori Panin stool of Akyem Abuakwa.

Nana Osim Kwatia, Gyasehene of Akuapem and Chief of Akuapem-Amanokrom, who briefed the Okyenhene said every traditional rite and procedure had been followed in installing the new Okuapemhene.

He said “after a long struggle, we want to inform you that we the kingmakers have installed someone to succeed Oseadeyo Addo Dankwa whom we lost some five years ago”.

Nana Dokua, the Okyenhema also reminded the Okuapemhene that life was full of mistakes and therefore he should be humble and listen to advice.

The new Okuapemhene, known in private life as Odehye Kwadwo Kesse Antwi is 34, a graduate and an old boy of the Presbyterian Boys Secondary School, he is the ninth to ascend the Ofori kuma stool at Akropong.

Eventhough many well-wishers from Okuapeman and Okyeman thronged the palace to witness the event, the social distancing protocol and the wearing of face masks were strictly enforced.