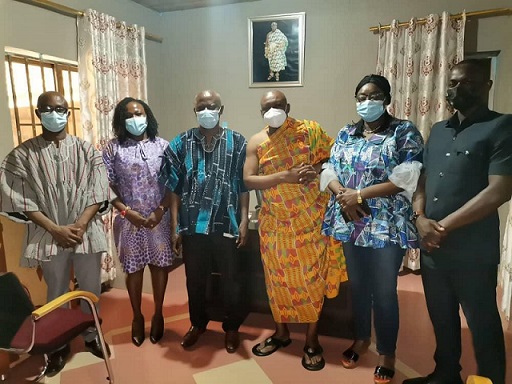 Nana Kwasi Bosompra I, the Paramount Chief of Goaso Traditional Area in the Ahafo Region has commended the government for rolling out the affordable housing project in the country.

He called on the Ministry of Works and Housing to facilitate the construction of the housing units, saying that remained the surest way to address deficits in the nation’s housing sector.

Nana Bosompra I, gave the commendation when Dr Freda Prempeh, a Minister of State in charge of Works and Housing paid a courtesy call on him at Goaso in the Ahafo Region, where he donated 30-acre land for the project.

The Chief praised Dr Prempeh, also the Member of Parliament (MP) for Tano North in the region for her hard work and selfless services to the nation, and added as a new region, the project would help lessen pressure on housing in the area.

On her part, Dr Prempeh explained the affordable housing project was very dear to the government adding her ministry was currently developing nationwide land banks to commence the project.

She commended the chief for releasing the land and stressed the government would collaborate with private sector investors to make the project a reality.

Dr Prempeh explained the project had prioritised local content, where building materials, would be purchase from local dealers, while the majority of the workforce would be engaged locally to create jobs for the people.

The Minister later paid a courtesy on Mr George Boakye, the Ahafo Regional Minister, and discussions were centered on the affordable housing project.

As a new region, Mr Boakye called on the ministry to ensure that the project commenced in the area as soon as possible, and assured the support of the Regional Coordinating Council.

In a related development, the Parliamentary Select Committee for Local Government has inspected some ongoing development projects in the region.

Led by Mr Nii Lante Vanderpuye, a ranking member, the committee inspected the progress of work on the construction of offices of the Regional Coordinating Council at Goaso and Hwidiem.

The Committee expressed satisfaction with the progress of work so far and advised contractors to speed up work.

Mr Boakye, who welcomed the committee, said the region required more development projects to raise it to a befitting status.