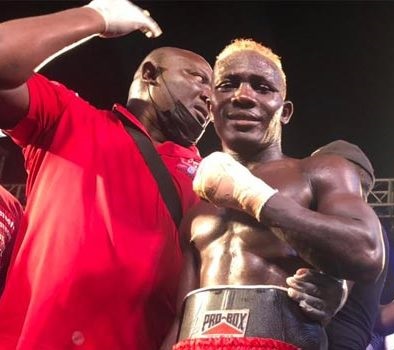 National Lightweight Champion, Michael Ansah retained his belt when he stopped challenger, Sherrif “One Time” Quayein the early hours of Sunday at the Bukom Boxing Arena in Accra.

Ansah, coming from the Charles Quartey Foundation Gym did not find his rhythm until the fifth round when his combination of hooks caught Quaye who was behind on the cards from round one.

This compiled Referee Erasmus Owoo to end the fight on realizing the Quaye was wobbling and could not stand on his feet after going down.

Some fans who besieged the ring thought ‘One Time’ coached by Carl Lokko of the Bronx Gym was doing well, but ‘One Bullet’ had his plan of a knockout as he predicted ahead of the fight.

Ansah, who is heading for a Commonwealth title as promised by Box Office Promotions now has 19 fights, 11 knock-outs, and two defeats, while Quaye’ record is also 20 fights with two defeats all coming from ‘One Bullet’ and 12 knockouts.

In other bouts of the 14 exciting features, Robert Quaye aka ‘Stopper’ who could not fight for the International Boxing Federation (IBF) Africa title as his South African opponent failed to turn up due to Covid -19 restrictions increased his unbeaten record to19 stopping a last-minute sub Raymond Kofi Ansah in round three, while Alfred Lamptey, the Bukom Bomber won the West Africa Featherweight title belt after knocking experienced George Krampa in round four.

Daniel Aduku had it very tough but won over journeyman Naimou Samson in round seven of their super welterweight fight.

Nigeria’s Olanrewaju Durodola knocked out Taryel Jafarov of Kazakhstan in round two of an international middleweight contest.

Daniel Gosh, one of the darling boxers from the Bronx Gym stopped Isaac Okine in round two of their bantamweight bout.

Ever improving Holy Dogbetor beat Edward Kambassah via a round two TKO in their featherweight clash.