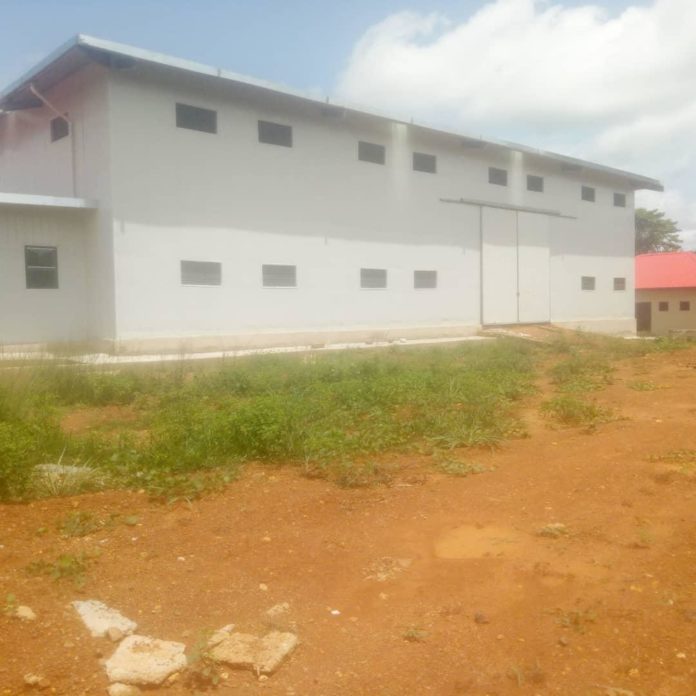 A 1000- metric tonne capacity warehouse under the One District One Warehouse project at Sefwi- Aboanidua in the Waiwso Municipality of the Western North Region is almost complete.

A visit to the facility by GNA, saw the construction firm putting in finishing touches on the project to be completed and handed over to the Ministry of Food and Agriculture.

The project according to Mr Lawrence Bannerman, Project Engineer for Mack Sam Company Limited, the construction firm executing the project, said the facility comes with a storeroom and security post among others.

He explained that the project, which started in July 2019 was expected to be completed in July this year and he was optimistic about meeting the deadline.

Mr Williams Appiah, Sefwi- Waiwso Municipal Crops Officer at the Ministry of Food and Agriculture, said the project when completed, would help farmers in the area to fight against post-harvest losses and motivate them to produce more to feed the nation.

He called on farmers to take farming as a serious business and seek expert advice from agric extension officers to boost their yield.

He appealed to the government to support farmers in the area especially those under the Planting for Food and Jobs with soft loans to make the warehouse useful.

Mr Appiah commended the government for giving out free rice seedlings and fertilizer to farmers in the area.

Some of the farmers in the area expressed their gratitude to the government for the construction of the Warehouse in the area since according to them when completed, would not only minimise post-harvest loses, but would also improve upon the marketing of their produce as well as help address poor farm-level practices and poor storage activities.