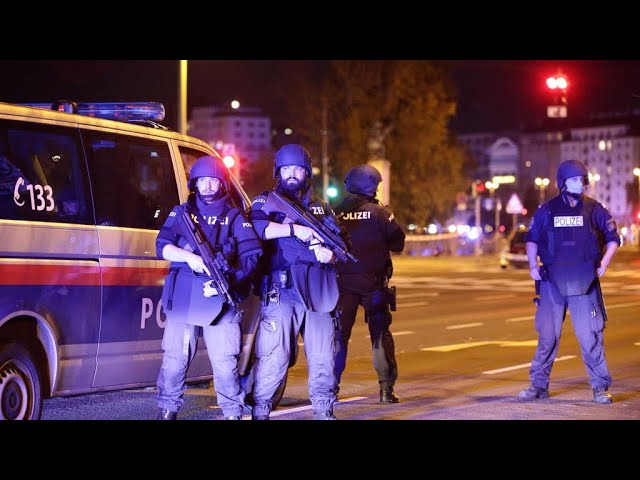 At least one suspect is still at large following a terrorist attack on central Vienna late Monday in which two civilians and one attacker were killed, Austrian authorities said.

“This is the hardest day Austria has seen for many years,” Interior Minister Karl Nehammer told reporters in the early hours of Tuesday, as he urged people to remain indoors and out of the city centre.

Vienna’s mayor Michael Ludwig said the attacker who had been shot dead by police was likely not wearing an explosive belt as had previously been reported, but rather a dummy belt, adding that this was still under investigation.

He was armed with a long gun, a pistol and a machete, Ludwig said in comments to broadcaster ORF. Police were still verifying the identity of the attacker.

Ludwig also confirmed a second victim, a woman, had died in hospital from her injuries. Officials had earlier said one person had died and at least 15 people were injured.

A seriously injured police officer was among the wounded.
Austrian Chancellor Sebastian Kurz said the attackers were “very professional” in their preparation and that they were well-armed.

Kurz said the attack was definitely terrorist in nature, but that there was currently no information about a motive, in comments on the ZiB Spezial news show, according to a report by the APA news agency.

Police said that several suspects armed with rifles began shooting in Seitenstettengasse, a street in central Vienna, at around 8 pm (1900 GMT) and that shots were fired in six different locations.

Officers were busy trying to clear people out of central Vienna. Those already indoors were told to stay there.
“Please leave the 1st District,” armed officers called out to pedestrians and cyclists as they tried to clear the area, APA reported.

Cars attempting to enter the zone were ordered to turn around as the inner city quickly cleared out. Helicopters were also out in force, with officers using a loudspeaker to ask people to “please leave the street, seek shelter in buildings.”

Broadcaster ORF reported in the early hours of Tuesday that some people who had been trapped inside bars and restaurants since the attacks had begun to head home. Others were allowed to stay for free at a hotel in the city.

A 53-year-old speaking to APA said all guests where he was got on the floor and waited for about two hours until police came and told them to get out of the city centre.

“We heard the shots and then we were told ‘lights out, doors shut,'” he said. French President Emmanuel Macron was among world leaders who condemned the attack.

“We, the French, share the shock and grief of the Austrian people,” Macron wrote on Twitter in French and German. “It’s our Europe. Our enemies should know who they’re dealing with. We won’t surrender anything.”

France is currently on high alert after an Islamist attack on a church in Nice and the beheading of a teacher in a Parisian suburb last month.

Monday’s attack began in a part of town known for its nightlife. Ludwig told APA they began shooting at diners “indiscriminately,” both inside bars and in courtyards.

At least one attack was in the vicinity of a synagogue, though police have not confirmed if the synagogue was a target or not. Oskar Deutsch, the head of Vienna’s Jewish Community, tweeted that the synagogue had been closed at the time of the attack.

A bystander who asked not to be named told broadcaster ORF that the shots had initially sounded like firecrackers.
“Then you noticed that they were shots,” he said. “He was firing wildly.

Then the police came and started firing.” Other witnesses told another broadcaster, oe24, that they had heard at least 50 shots. It aired images of one injured person who was bleeding and being tended to, as well as video of a masked man firing off at least two shots, along with an image of a pool of blood in front of a restaurant.

Austria is about to enter into another shutdown to stem rising numbers of coronavirus infections, with Monday the last night when restaurants and bars were open.