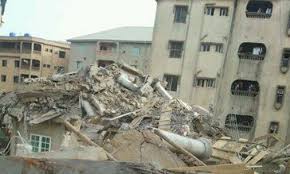 Following the collapse of two buildings in Onitsha within a two-week period, ?Gov. Willie Obiano has directed the expansion of the mandate ?of the Collapsed Building Investigative Panel chaired by Arc. Peter Okpala. ??Both collapsed buildings are in the Onitsha South Local Government Area.
On 2 June 2014 a four-sotrey building on the premises of St. Christopher Anglican Church, Odoakpu collapsed killing four persons. ?On Friday 13 June, 2014 another four-storey building ?at 10 Udi Street Fegge, Onitsha crumbled and injured two persons.?The latest incident, which occurred close the popular APZ Plaza junction where Zik?s Avenue and Creek Road intersect, happened around6.00 p.m. on Friday.?The collapsed building had reached roofing stage.
Gov. Willie Obiano who visited the site of the most recent collapse on Saturday 14 June morning, directed that the mandate of the?Panel investigating the collapsed building at St Christopher’s in Onitsha should be expanded immediately to include the building at 10 Udi Street Fegge, Onitsha. The ?Panel is also required to randomly select and inspect some ongoing building projects in the Onitsha, Nnewi, and Awka to ensure their integrity.
Besides investigating the probable causes of the catastrophic failure of the two buildings, the task of the Panel now includes, more specifically, “to?select and inspect some uncompleted buildings in Onitsha, Nnewi and Awka;?determine how qualified the contractors are; and??review building approval processes and how the builders are engaged.”
SSG Oseloka H. Obaze confirmed Gov. Obiano’s directive and said the chairman of the Panel, Arc. Peter Okpala who was attending a conference in Abuja over the weekend had been?briefed on the expanded mandate.
Send your news stories to newsghana101@gmail.com and via WhatsApp on +233 244244807 Follow News Ghana on Google News

Blocks made with aquatic weed 60% cheaper than traditional cement