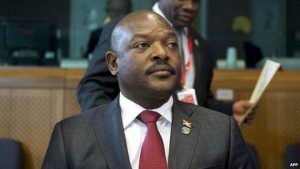 A group of 17 opposition parties in Burundi has agreed to boycott next month?s elections, saying they will not be free and fair.

The opposition says President Pierre Nkurunziza should not be allowed to seek a third term in office.

They also demand a further delay ? a position supported by regional leaders.

Burundi has been hit by street protests and a failed coup since President Nkurunziza announced in April that he would seek re-election.

On Thursday, UN envoy Said Djinnit, who had been hosting talks between the two sides stepped down, as the opposition had demanded. The opposition also noted that the electoral commission was not complete after two of its five members fled the country.

Despite the announcement, the opposition is unlikely to carry out its boycott threat, says Felin Gakwaya, from BBC Great Lakes service.

They are trying to increase pressure on the government ahead of this weekend?s African Union summit, he adds.

The crisis in Burundi is one of the issues expected to dominate proceedings at the summit which is taking place in Johannesburg, South Africa.

The presidential election was postponed by 18 days, which falls short of a call by regional leaders to delay the poll by at least six weeks.

The opposition and civil societies say Mr Nkurunziza?s attempt to run for office again contravenes the constitution, which states a president can only serve two terms.

However, the Constitutional Court has ruled that he was first elected in 2005 by parliament, not in a popular vote, and so he is eligible to stand again.

Outcome of NPP’s Elections: A paradigm shift to break the eight?