The Speaker of Parliament, Prof. Aaron Mike Oquaye has accepted the Member of Parliament for Bawku Central,  Mahama Ayariga’s apology for making what the Joe Ghartey Committee found to be false bribery claims against some members of the Appointments Committee.

He asked the House to forgive Mr. Ayariga who was found guilty of contempt of Parliament for falsely accusing some members of bribery.

The Speaker, while giving his final ruling on the matter cautioned Mahama Ayariga not to repeat his action in the future else “will have himself to blame.”

Prof. Oquaye’s ruling comes after he accepted an apology letter from the Mahama Ayariga on the matter which was made orally and written.

The Bawku Central MP was charged with contempt for making unmerited bribery allegations against Members of the Appointments Committee and the Minister of Energy, Boakye Agyarko.

A special committee, chaired by Joe Ghartey, the Essikado-Ketan MP that was constituted by the Speaker to investigate the matter concluded that Mr. Ayariga flouted Article 122 of the 1992 Constitution, Section 32 of the Parliament Act, 1965 (Act 300) and Orders 28 and 30 (2) of the Standing Orders of Parliament in his claim that the Chairman of Parliament’s Appointments Committee, Joe Osei Owusu was used as a conduit by the Minister for Energy, Boakye Agyarko to distribute a GH¢3,000 bribe to minority members of the Appointments Committee to facilitate Mr. Agyarko’s approval after his vetting.

Prof. Oquaye reiterated his appeal to Joe Osei Owusu not to go to court but channel any challenge to the House for redress.

Mahama Ayariga who was expected to apologize to the House when the Joe Ghartey Committee report was first read issued a reluctant one after which the House descended into chaos.

He has however formally apologized in his letter to Prof. Oquaye. 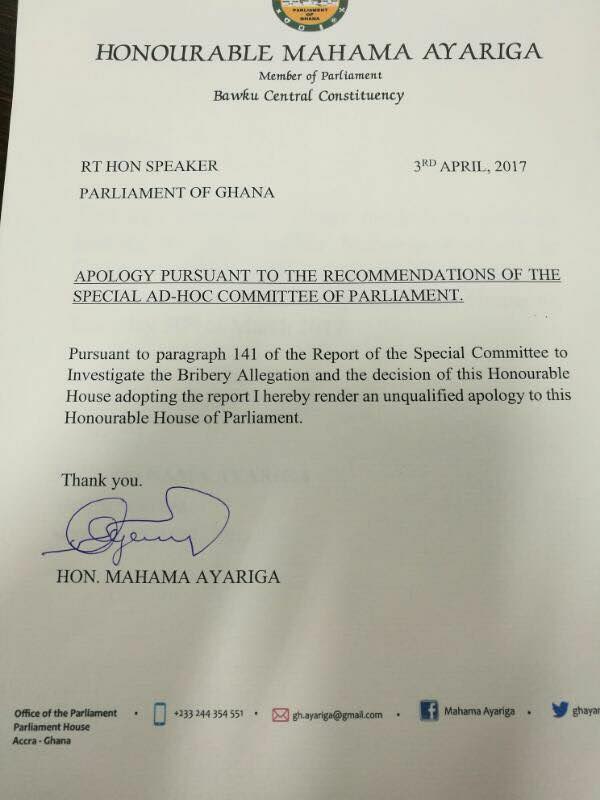 Guinea’s special forces claim they have taken over