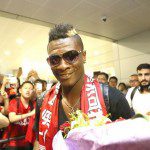 The 29-year-old completed a surprise big-money move to the Chinese side from Al Ain last week.

The Ghana international has suffered some criticism for shunning the stellar leagues in Europe in search of big bucks despite his quality.

But Ghana legend Osei Kofi has backed the striker?s decision to go in search of money, insisting it?s the ?wisest? career decision.

?Whatever work people do is to earn money and also progress. In Ghana, a poor person is regarded as an unwise, so if Gyan left Sunderland to the Arab world to earn enough money, it is worth it,? he told Metro fm.

?No one should criticise Asamoah Gyan?s move to China, because he could loan Ghana some money out of the deal and also a lot of Ghanaians would benefit from it.

?Mark it on the wall, the same way he didn?t lose form after joining Al Ain, but continued to score more goals for Ghana, he would do that whiles in China. I think that his move to China is the wisest one.?

He added: ?If this country is worth dying for, Jones Attuquayefio would be alive and when Emmanuel Quarshie the skipper of the Black Stars AFCON winning team of 1982 felt sick it was his club Zamalek that took care of his medical bills.?

Osei Kofi, who is now a revered minister, continues to rue his decision to reject a 30,00 pound  move to Stoke City during his playing days.