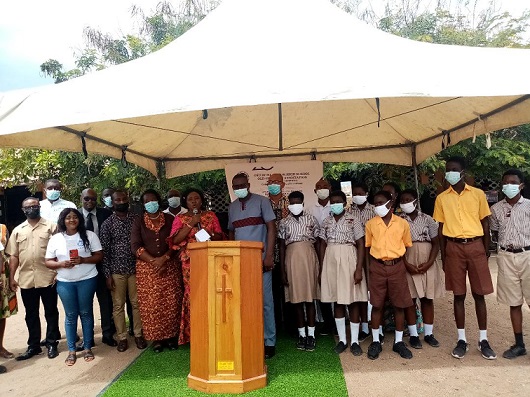 The launch of the anniversary by the Alumni will kick start planned developmental projects for the school.

He said they would continue with the Osu Home JHS vision and mission in providing a student centred learning environment by upgrading facilities such as the library and classrooms.

Mr Sowah stated that their goal as a year group was to construct a state- of—the-art Library to serve the students as well as children in the community.

He said activities to be undertake include Health walk and Screening which would take place on July 31.

He added that the group would donate items to the Osu Children Home on August 14 and on November 13, there would be a fundraising and awards night geared towards the construction of Library.

Mr Sowah said they would climax the anniversary celebration with a Thanksgiving service on December 5th at the Epiphany Presbyterian Church in Osu.

The President of the HOMECANs called on all past students to participate in the projects which was part of their efforts of give back to school and the community.

Madam Rita Naa Odoley Sowah, launching the anniversary, congratulated the 2001 year group for seeking to bring hope and support to the School.

She said she was passionate about education especially the basic level of education in the community and that during her tenure as Municipal Chief Executive (MCE), she made sure that education was made attractive to the youth or the students within the Municipality.

Madam Sowah said she was ready to give more in the area of education and that the Library project was one of the promises she made to the people in the constituency.

She called on the pupils to study hard and go higher and later come back to contribute to the further development of the School and the Community.

He said OHSOSA also had a Fund which focused on the developmental activities of the Schools in the Community and that they were glad the HOMESCANs ideas were in line with the mother Association’s dream.