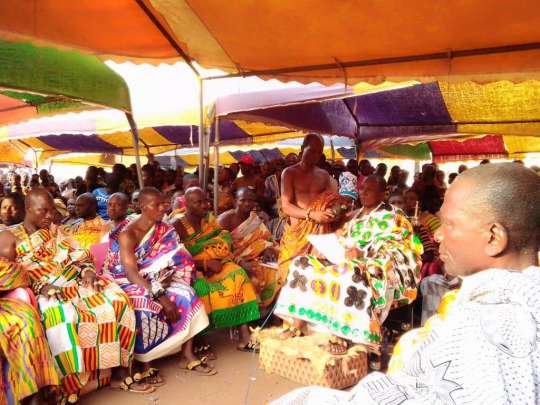 “All the people in the region and beyond will attest to the fact that within a very short period of the creation of the Oti region, we, as a region have started witnessing remarkable and progressive development,” he said.

Nana Lupuwura who was speaking at Nkwanta during a durbar of Chiefs and people of the area at a sod-cutting ceremony by President Nana Addo Dankwa Akufo-Addo for the construction of a two-storey Food and Agriculture Regional Directorate said, “Under the good leadership of the President, the people of Oti have enjoyed tremendously from his generosity.”

He said projects such as rehabilitation of a Magistrate Court, market and the construction of a warehouse to support agricultural activities enjoyed under government’s One Million One Constituency initiative as well as the building of school block and girls dormitory for Nkwanta Senior High School (SHS) to enhance teaching and learning under government’s Free SHS policy were commendable.

The Paramount Chief said the region had also acknowledged government’s efforts towards the construction of two important roads in Oti- Nkwanta-Shiare and Nkwanta-Dambai, which were at different levels of completion, adding that health delivery in the constituency had improved with the provision of an ambulance for the constituency.

He said some major challenges affecting farmers in the area were bushfires, long period of drought, deplorable roads and inadequate proper farm inputs and called on government to as a matter of urgency, tackle the problems to whip up the interest of the youth in agriculture.

President Nana Addo Dankwa Akufo-Addo said government had taken note of the concerns of the area into consideration and expressed his government’s commitment to fixing roads in the area to open it up.

Construction works on the Oti Regional Directorate of Food and Agriculture in Nkwanta is expected to be completed in eight months.