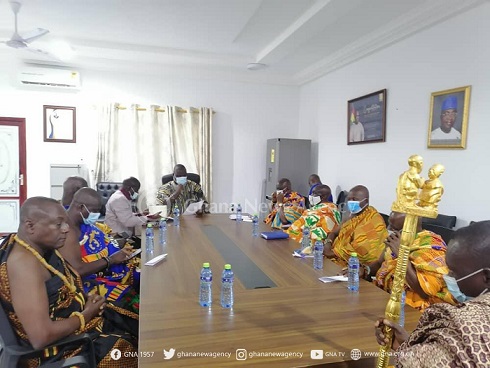 Oti Regional House of Chiefs has reminded the government to actualise its promise to construct a bridge over the Oti River to enhance the socio-economic activities of the region.

Nana Mprah Besemuna III, President of the Regional House of Chiefs said after fulfilling the creation of a new region to bring development to the area, the next on agenda is a bridge across Oti River to complete that phase.

Nana Besemuna said these when a seven-member delegation of the House of Chiefs Regional paid a courtesy call on Mr Joshua Gmayenaam Makubu, the Oti Regional Minister at the office of Oti Regional Coordinating Council (ORCC) at Dambai.

Nana Besemuna said President Akufo Addo stated that the bridge was currently at the design stage to determine where it would be located.

He said the ferry at Dambai, the Oti Regional capital has outlived its usefulness with its frequent breakdowns, leading to the growing frustration among users of that corridor, including traders and drivers.

He was optimistic that the construction of the bridge would relieve communities in these areas of the long waiting periods and excruciating slow movement of goods, cargo, and people.

Mr Joshua Gmayenaam Makubu, the Oti Regional Minister assured the Chiefs that he would convey their reminder to President Akufo-Addo and do the necessary follow-ups until the bridge project was delivered.

He said a regional task force together with representatives from chiefs would be inaugurated to clamp down on charcoal burners and other activities that deplete the forest in the region.