The Otublohum Dade-Ban Naa, a traditional division of the Ga State in the Greater Accra Region has marked the 2022 Homowo celebration with a call for unity and progress among family members of Otublohum and Gas.

Celebrated under the auspices of the Supreme Head of Mantse Ankrah Royal Family, Nii Adjabeng Ankrah II, administratively organised a remarkable Homowo celebration coupled with some activities to commemorate the event. 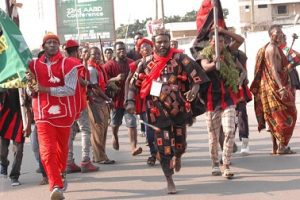 Homowo is a festival celebrated by the Gas who embarked on a quest for a harmonious location and died due to hunger, where the journey stemmed from Israel, Egypt, Sudan, Cameroon, Nigeria, Benin, and Togo until they reached their final destination “Akra” popularly known as Accra.

According to Nii Adjabeng Ankrah II, the purpose for Otublohum Dadeban-Naa to celebrate was to underscore the virtue of unification of the Ga state for a progressive future.

He mentioned that peace was an important element for the progress of the Ga State in order to imbibe love among all the states as one people with a common agenda to successfully ensure tranquility. 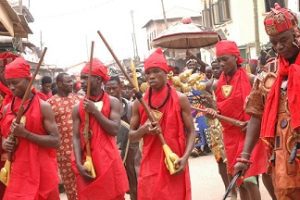 Nii Adjabeng called for maintaining and sustaining the tradition of the Gas which has rich cultural norms that serve as a catalyst for progress.

Observing the entire Homowo celebration by The Spectator, Nii Adjabeng Ankrah II sprinkled “Kpokpoi” a traditional feast meal used for celebrating the festival on the streets of Ga Mashi on Saturday where acknowledgments were rendered to the dead who fought for stability and peace.

After the sprinkling in Ga Mashi, Nii Adjabeng Ankrah II led another sprinkling of “Kpokpoi” at the Mantse Ankrah Royal Mausoleum of Otublohum Dadeban-Naa which recently received a facelift and located at North Kaneshie, Accra to give reverence to the dead for the ancient struggles they overcame to make Otublohum a formidable state in Ga Mashi.

The principal streets of North and South Industrial Areas in Accra which belongs to the Otublohum’s were sprinkled with “Kpokpoi” as custom demands.

Nii Adjabeng Ankrah II, who would mark his sixth-year anniversary in November 2022 on the stool has been phenomenal in executing successful mandates in the history of his leadership including settling disputes and claiming properties that belonged to the Mantse Ankrah Royal Family and Otublohum among others.

Diplomats, tourists, and people from all walks of life were present to witness the Otublohum Dadeban-Naa Homowo 2022 celebration.

Principal Elder of Mantse Ankrah Royal Family, Mr Nii Ayi Ankrah told the public not to associate the celebration of Homowo with diabolic meanings because it was a tradition that needs to be cherished by generations.

“We need to hold onto our culture in order to see a progressive Ga State because the Ga people have rich cultural norms that need to be cherished and preserved”, he lamented.

He said it was out of ignorance, some people associate the celebration and rites performed with diabolical interpretations because most of the rites could be referenced in the Holy Bible.

Veep lauds the people of Ga for beautiful Homowo culture