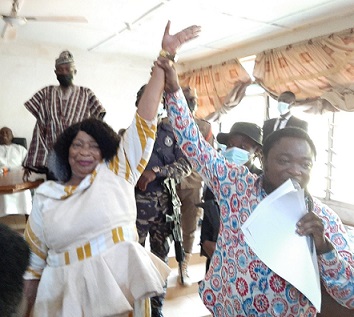 Madam Vida Akantagriwen Anaab, the newly confirmed Municipal Chief Executive (MCE) for the Builsa North Municipality of the Upper East Region, says poverty is the common enemy of the people of Buluk.

She, therefore, pledged to collaborate with traditional leaders and all well-meaning residents of the Municipality to enable the area to realise its development aspirations and work together to reduce poverty.

Addressing stakeholders after she was overwhelmingly confirmed by all the 42 Assembly Members present, the MCE-elect said: “The effective collaboration of our efforts would enable us to implement the vision of President Nana Addo Dankwa Akufo-Addo for the Municipality and lift our people out of poverty.”

Madam Anaab noted that issues of security, health, education, agriculture, infrastructural development and energy would be her areas of focus.

“I am willing to engage and partner all well-meaning Ghanaians to advance the welfare of our people and Buluk in these areas.”

The MCE-elect, who is also a retired midwife, called on all Builsas irrespective of their ideologies and location to support the development of Buluk land.

She further acknowledged that Non-Governmental Organizations (NGOs) played significant roles in development across the Region and invited NGOs whose orientation was geared towards human-centred development and poverty alleviation to extend support to the area.

Madam Anaab expressed gratitude to President Akufo-Addo for the confidence reposed in her to serve as MCE, the traditional and religious leaders for their support, and thanked the Assembly Members for the overwhelming endorsement.

“I deeply appreciate your massive support through the ballot in ensuring my confirmation as Municipal Chief Executive for Builsa North,” Madam Anaab said.
Three Assembly members were absent.

“Instead of allowing partisan politics to divide us, we should put the interest of our communities, Region and country before all other considerations. What should occupy our attention as leaders include contributing to making the Assembly effective.”

He urged Assemblies in the Region to initiate measures to attract the required investments to create jobs and skills and partner relevant organizations to generate resources, development and serve as effective links between the electorate and partners in development.