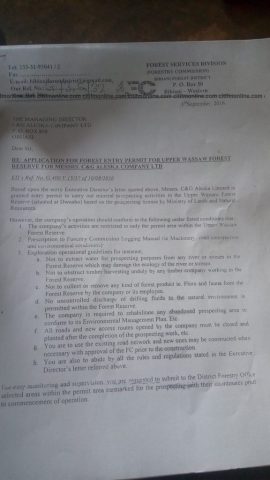 At this point, it makes sense to perhaps humbly ask God to take charge of the steering, since we have lost control over the galamsey [Illegal mining] menace as a country.

Three ancient forest reserves; so ancient such that only few of us living today saw their beginnings, have been invaded by illegal miners, taking down several acres of the reserves very fast with impunity.

After killing every life and leaving harmful chemicals in major rivers, after taking down several acres of cocoa trees, after digging down plantations and food crops, the insatiable appetite for illegal gold by illegal miners, has ended them in the Upper Wassa Forest Reserve at Juabo in the Wassa Amenfi Central District, Western Region, the Fure River Forest Reserve at Prestea in the Prestea Huni Valley District, Western Region, and the Tonton Forest Reserve in the Upper Denkyira District of the Central Region.

Problem with it is that, mangers of the reserves are helpless. They are themselves attacked by armed and well-built ex-service men employed as security guards to barricade entry and exit points. The images, as I sneaked deep into these reserves several kilometers are disturbing.

I got to know of it when devastated community members of Juabo and adjourning communities hinted Forest Watch Ghana of their disgust towards the illegality. After three months of underground investigations, these are the things I found.

The impunity is glaring! Before entering the Juabo community [the major community around this reserve], I was welcomed by long articulated trucks carrying excavators headed into the forest.

Few kilometers into it, there was another ready to execute excavator at the fringes.

Before I returned, it was gone! Inside the forest, community leaders at first counted 9 excavators. In a matter of months, the excavators had jumped to 28.

28 excavators used for prospecting in a forest reserve is a story told in Ghana only!

The “prospecting” is to end on 8th August, 2018 amidst maximum security. Community members who have not seen this encroachment since the coming of the forest opposed the move. They first seized the 9 excavators and took its keys to the Asankragua Police Command.

Later the keys were handed over to the company after the DCE for the district Peter Kwakye Ackah intervened on the company’s behalf. The fast devastation and regular importation of more excavators alarmed the chiefs and people of Juabo, Ayiem and Sraha.

They seized some other excavators, but the Western Regional Chairman of the opposition National Democratic Congress [then in power] Michael [Big] Aidoo, was said to have intervened to clear all barricades.

On 19th October, 2016, the three communities demonstrated against the company and state authorities.

Months after the protest, nothing seems to have changed. There are however regular clashes between community members particularly females, who are denied access to their farms along the fringes of the reserve and the thugs providing “maximum security” the Forestry Commission proposed.

Tonton Forest Reserve is in the Upper Denkyira District of the Central Region. Part of it stretches to the Western Region. According to the chiefs and people, they woke up one day to see trucks of excavators trooping to the reserve their grandparents guarded jealously.

Please stay glued to the third [part 2] and most disturbing intrusion into a reserve declared a Globally Significant Biodiversity Area [GSBA] in the Kufour administration.