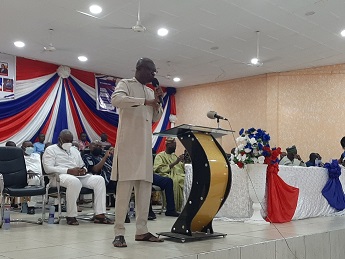 Mr Abdulai Abanga, the Member of Parliament (MP) for the Binduri Constituency in the Upper East Region says the poor performance of the New Patriotic Party (NPP) in the 2020 Presidential and Parliamentary elections in the Region was self-inflicted.

He said the Region, stood the chance to win more Parliamentary seats in the 2020 elections, “But because we were fighting among ourselves we lost them.”

Speaking on the theme; ‘Reflect to break the eight,’at the 2021 Regional annual Delegates Conference of the NPP in Bolgatanga, the only MP for the NPP in the Region, said if the Party really wanted to break the eight-year rule of political parties in Ghana, the Upper East Region had to contribute to the success of that vision.

According to him, “If you go round and interact with the people, it is clear that there are several Constituencies that at the time of the campaign, you could tell that but for the disunity, those seats should have been part of the NPP caucus in Parliament.”

Mr Abanga, who is also the Deputy Minister for the Ministry of Works and Housing, urged members of the NPP in the Region to put away their individual differences and work in unity for the success of the Party.

“Once the Party wins, there is a lot to share, we can talk of the Planting for Food and Jobs and the Free Senior High School programmes among others, we are one of the poorest in this country, and for the President to declare Free SHS for this country, we should have been winning all the seats but not one.”

He said the Party would soon hold elections from the Constituency to the National level, and observed that the disunity usually originated from the internal elections which affected the general election.

The MP advised that “After these elections, let’s come together and fight for the NPP to break the eight-year rule, which we must do. If we want to get sustainable development in this country, we have to make sure that there is an NPP government from 2024 onwards.”

This, the Deputy Minister said was the only way that “These investments and the gains that we have made in the past four years can really have a great impact in the lives of Ghanaians.”

The conference was attended by current and former government appointees, some National, Regional and Constituency Executives, and other members of the Party across the Region.

Religion must be a springboard for national coexistence – MP