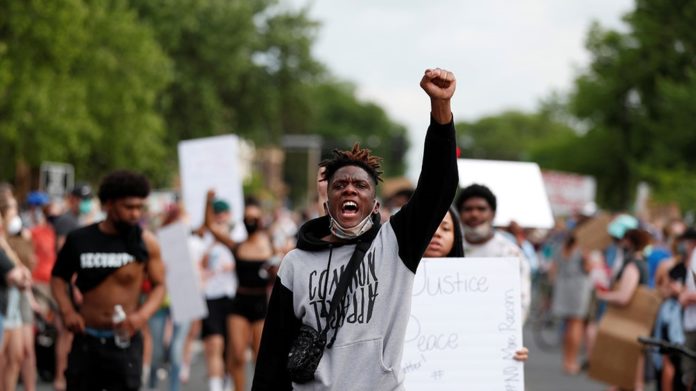 Four Minneapolis police officers have been terminated from their jobs in the aftermath of the videotaped exposure of the blatant killing of George Floyd.

This act of police violence which has no justification is by no means an isolated incident.

A white officer was seen in the video taken on a cell phone applying pressure from his knee on the neck of Floyd. The victim said repeatedly that he could not breathe yet the policeman continued to carry out the behavior while another officer was captured looking on and taking no action to restrain the one doing the choking.

The killing of Floyd marks a continued program of intimidation, violence and execution levelled against African Americans for centuries. The government in Washington, D.C. has given state approval to target, seize and liquidate anyone deemed a threat to the status quo of racism and national oppression.

During the course of the COVID-19 pandemic in the United States and prior to the outbreak during early and mid-March, African Americans have been systematically targeted by law-enforcement agencies as well as racist armed individuals and organizations for harassment, arrest, prosecution, imprisonment, serious injury and death. The pandemic which has disproportionately impacted the African American people in urban, suburban and rural areas has not lessened the lethal force policies of the repressive apparatus of the capitalist state.

Immediate denunciations of the police killing of Floyd took place around the U.S. and internationally. In Minneapolis itself, large crowds gathered outside the police station to protest the death of Floyd along with demanding the detention and prosecution of the police officers involved. (https://www.theguardian.com/us-news/2020/may/26/george-floyd-killing-minneapolis-protest-police)

On the evening of May 26, police wearing riot gear launched tear gas against the demonstration which had surrounded the public safety headquarters. Activists angered by the Floyd killing blocked traffic to bring attention to the plight of African Americans subjected to the deadly force that is routinely justified by the legal system.

During the course of the confrontation several police cars were damaged by angry demonstrators from the community. Although Mayor Jacob Frey and police chief Medaria Arradondo have attempted to distance themselves from the killing of Floyd, their statements do not convince a significant element within the city which has witnessed such extra-judicial executions for decades.

Minneapolis police have been the focus of mass demonstrations for many years due to brutality and deadly force utilized against African Americans and even one Australian woman. The police throughout the U.S. are given wide discretion in exercising the use of weapons and tactics which often result in death.

One of the first executive orders issued by the administration of President Donald Trump was to nullify all of the consent decrees instituted by the Justice Department related to police misconduct. These federally-supervised consent judgements and decrees grew out of similar incidents which resulted in the unjustified killings of African Americans, people of Latin American descent and other oppressed communities in the U.S.

Despite the weaknesses of the consent decrees, the administration sought to send a signal to law-enforcement that excessive and lethal force was endorsed at the highest levels of the federal government. In this election year, where the Trump regime is desperate for its very own political survival, the administration is fostering racism and other forms of intolerance to shore up its own base.

Vigilante Racism in Georgia: The Brutal Death of Ahmaud Arbery

Prior to the police killing of George Floyd, the case of Ahmaud Arbery drew the attention of the public when a video of his brutal killing was finally released on social media. Arbery had been jogging in the vicinity of his neighborhood when he was pursued by two white men and shot to death. Two white men, a father and son, were arrested in May and charged with felony murder in the case.

The third person in the vehicle videotaping the incident has now been arrested and charged with murder as well. Although the third person says that he had no role in the shooting death of Floyd, this individual did absolutely nothing to restrain the father and son carrying out the killing.

It would take several weeks for the fate of Arbery to receive national and world attention as a direct result of the failure to disclose details of the actual incident by the local authorities. Since the revelation about the unjustified shooting death large demonstrations have occurred demanding justice for Floyd.

A hearing for the three white men is scheduled for next month. A report published by ABC News says: “The three Georgia men charged in connection with the killing of Ahmaud Arbery have been scheduled for a preliminary hearing on June 4. Arbery, 25, was shot and killed Feb. 23 as he was jogging through the Satilla Shores, Georgia, neighborhood, but charges weren’t filed until last month. Gregory McMichael, 64, and Travis McMichael, 34, were charged with the felony murder of Arbery on May 7, and William Bryan, 50, was charged May 21.” (https://abcnews.go.com/US/hearing-set-georgia-men-charged-ahmaud-arbery-killing/story?id=70906145)

Georgia was the center of national attention in 2018 when charges of voter suppression were made during the gubernatorial election involving Democratic candidate and former Minority Leader in the State House of Representatives Stacey Abrams and Republican Brian Kemp, who was serving as Secretary of State at the time. Even though there was clear evidence of deliberate disenfranchisement of African Americans in Georgia, the courts refused to declare Abrams the winner.

Kemp was recorded earlier in the year saying he was not aware that asymptomatic COVID-19 patients could transmit the virus to others. The Georgia governor has attempted to maintain his alliance with the Trump administration by neglecting many of the Center for Disease Control and Prevention (CDC) and White House Task Force guidelines related to containing the pandemic.

It has been more than fifty years since the police raid on the Chicago residence of Black Panther Party Chairman Fred Hampton on December 4, 1969. Hampton and his comrade Mark Clark of Peoria, Illinois, were murdered by several police officers assigned to the raid by the-then Illinois State’s Attorney Edward V. Hanrahan.

Several other members and supporters of the BPP were wounded, arrested and falsely charged on felony counts. The police were never held accountable in the assassinations of Hampton and Clark. The Federal Bureau of Investigation (FBI) had planted an informant in the Chicago Chapter of the BPP whose job was to provide detailed information to the government and to discredit the organization. The informant turned over the floor plan to the Panther apartment and later on the night of the raid, drugged the occupants of the residence so they would be incapable of defending themselves against the police.

On March 13, Breonna Taylor, a 26-year-old emergency medical technician, was asleep in her bed when a “No Knock” drug raid was carried out by Louisville, Kentucky police. The police had conducted the operation at the wrong address. Taylor died after being shot eight times. Her partner, Kenneth Walker, discharged his firearm during the raid and was arrested by police. Charges against him have subsequently been dropped. (https://www.wlky.com/article/lmpd-addresses-threats-towards-officers-in-midst-of-breonna-taylor-investigation/32679490#)

The family of Taylor is demanding justice in the horrendous law-enforcement action. The police chief has since announced his retirement yet none of the officers have been terminated or charged with murder. A reef laying at Taylor’s home and a rally to demand justice for the slain woman were held on May 25-26. (https://www.wave3.com/2020/05/25/friends-family-hold-wreath-laying-woman-shot-by-lmpd/)

Repression Will Escalate During the Current Period

The magnitude of police brutality including beatings, false arrests and killings appear to be increasing over the last few years. Statistics on the number of people killed by the police indicate that law-enforcement agents took the lives of more than 1,000 people in 2019. African Americans were 24% of those killed despite being only 13% of the population. (https://mappingpoliceviolence.org/)

Another source which monitors lethal force by police noted that: “Sadly, the trend of fatal police shootings in the United States seems to only be increasing, with a total 228 civilians having been shot, 31 of whom were Black, as of March 30, 2020. In 2018, there were 996 fatal police shootings, and in 2019 this figure increased to 1,004.” (https://www.statista.com/statistics/585152/people-shot-to-death-by-us-police-by-race/)

Irrespective of whether there is a Democratic or Republican administration in Washington, the relationship between African Americans and the police remains unchanged. The principal role of law-enforcement within a racist capitalist society is to protect private property and the state. Since Black, Brown and other oppressed communities are the most exploited under the existing system, they often suffer the brute force of the repressive apparatus.

Demonstrations and all forms of resistance against police misconduct require greater coordination on a national and international scale. In the final analysis it will take a movement of millions to effectively end police violence against the people along with many other forms of state repression.