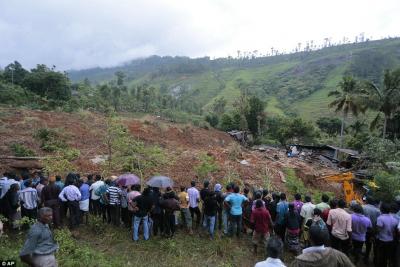 At least eight people are dead and hundreds may be trapped after a landslide ripped through a village in Sri Lanka Wednesday, the state-run Lankapuvath news agency reported.
The landslide hit the south-central Badulla District Wednesday morning, destroying at least 140 homes, said Pradeep Kodippili with Sri Lanka’s Disaster Management Center.
Between 300 and 500 people may be misisng, Lankapuvath reported.
The rescue operation involving police, the military and disaster management officials had to be suspended for the day due to poor weather, Lankapuvath reported, citing the agency head Mahinda Amaraweera.