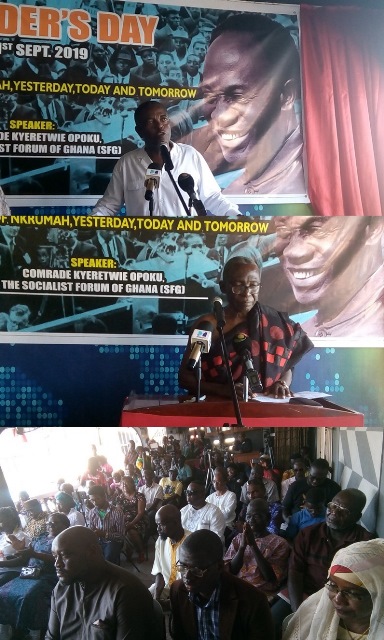 Mr Kwesi Pratt Jnr, Co-founder of the Socialist Forum of Ghana, has expressed concern at the increasing monetization of politics and political parties in the country, saying it is taking a toll on the quality of leaders required for development.

He said politics today has been denigrated to who has the purchasing prowess to buy him or herself into power without necessarily having the leadership intellect to direct the affairs of the nation to foster development.

Mr Pratt said this at a public lecture organized by the Socialist Forum of Ghana to mark the 110th anniversary in honour of late Dr Kwame Nkrumah in Accra.

He was speaking on the topic: “Relevance of Nkrumah: Yesterday, Today and Tomorrow”.

Mr Pratt called for a paradigm shift on how political parties and politics is perceived in the country.

Formation of political parties, he said, should be viewed as an intellectual activity that should bring understanding to issues rather than just electoral machinery.

One needs to learn, learn your history, learn some current development in the world, learn about science and how it can be applied, learn about linkages in things, learn about directives, how everything is connected to everything and that’s how you can become a good politician”, he said.

Touching on the relevance of the late Dr Kwame Nkrumah, Mr Pratt said he was dismayed at attempts by ‘anti-nationalists’ forces to belittle the efforts of the founder and first President of the country in the independence struggle .

This, he said, was a clear attempt by such groups to distort the facts of history to serve their parochial interest.

Mr Pratt called the inclusion of history in curriculum at all levels of the country’s educational ladder to enhance the understanding of citizens on how far the country has come and what ought to be done to facilitate development.

“History is an important subject which should be taught at all levels of education because if we have no idea about where we are coming from we are not likely to define where we are today and to make strides into the future. And I have heard so much which fully convinces me and indeed us the SFG that this country has not paid serious attention to its history”, Mr Pratt said.

On his part, Mr Felix Amoah, the Chairman of the Council of Elders of the Convention People’s Party (CPP), called for unity among party members and ensure that they upheld the ideology of the founder to ensure the restoration of its lost glory.

“Let’s all continue to work assiduously together to overcome any problems and divisions within the Nkrumah’s political family and move ahead as a unified force for Nkrumaism is as relevant today as it was more than 55 years ago”.