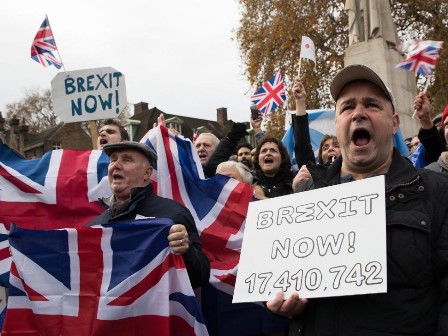 Irish Finance Minister Paschal Donohoe announced on Tuesday that the Irish government has prepared over 1.2 billion euros (about 1.3 billion U.S. dollars) in its 2020 budget to deal with Brexit.

The figure was announced by the minister while he was addressing the Irish parliament on the government Budget 2020 on Tuesday afternoon.

“Brexit is the most pressing and immediate risk to our economy,” he told the parliament, adding that the context for Brexit has now shifted to a no-deal Brexit as the Irish government’s central assumption.

“This does not mean that No Deal is inevitable. But equally we stand ready if it does happen,” he said.

According to Donohoe, the funding prepared by the Irish government in its 2020 budget in response to Brexit consists of two parts. The first part, which is approximately 200 million euros, is intended to make sure that Ireland is ready for Brexit, whatever form it takes, while the second part, which amounts to 1.06 billion euros, is prepared in the event of a no-deal Brexit.

The first part of the funding will be allocated next year across a number of departments and agencies to increase the level of staffing, upgrade infrastructure at Irish ports and airports and invest in information technology and facilities management, explained Donohoe. The second part of funding includes 650 million euros which will be made available to support the agriculture, enterprise and tourism sectors and to assist the most affected citizens and regions, he said, adding that an additional 365 million euros will also be provided for extra social protection expenditure and other related schemes with a further 45 million euros being made available to assist people to transition to new employment opportunities.

The second part of the funding “will be borrowed money”, he said, adding that the government will not borrow the money if it does not need it.

He also assured the parliament that the second part of the funding will not be borrowed for other purposes if a no-deal Brexit does not happen.

“If the economic impact of a No Deal is more severe than forecast, I am prepared to use resources that would otherwise have been dedicated to the Rainy Day Fund,” he told the parliamentarians.

The Rainy Day Fund is a fund accumulated by the Irish government over the years, which will be used in the event of an adverse shock to the country’s economy.

Donohoe said that an additional 1.5 billion euros will be transferred to the Rainy Day Fund from the Ireland Strategic Investment Fund to deal with the impact of a no-deal Brexit.(one euro = 1.095 U.S. dollars) Enditem

Namibia delegation in Ghana to engage parliament on budget

Cut down budget of Office of the President – Mahama